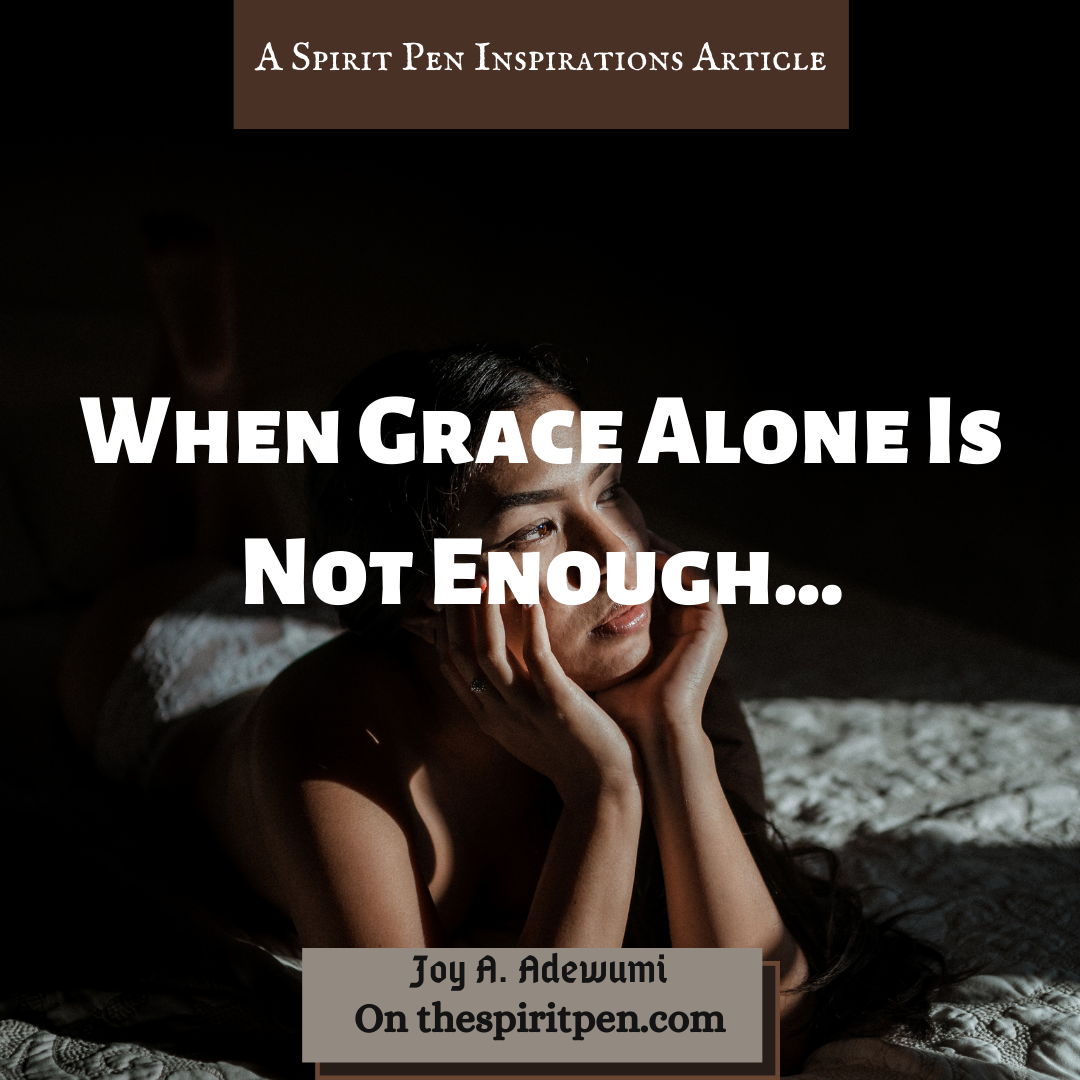 Is it ever possible that grace is not enough?

Can we conclude when a believer keeps rising and falling back into his old ways that the grace available to him was not sufficient for the journey?

Well, we’ll find out in a jiffy!

First, let me set this precedent

Some time ago, I was alone with my thoughts and I began pondering on this issue.

I realised many people got married without being certain they were ready for that kind of commitment. Just when they were beginning to find themselves or even before they could find themselves, they suddenly realised they are at ‘that age’ when a relationship is a right way to go, then they jump on a train whose destination they aren’t sure they want to end up and invariably end there. Then few years into the marriage as they try to juggle the commitments of marriage, parenthood and maybe their jobs, they realise they had allowed life happen to them instead of the other way round. Click here to join my Telegram Channel and get quick blog update alerts!

What about tertiary education, especially in this part of the world? How many people study what they study for whatever reason they study it without a real conviction as to whether or not they really want to study it? Of course, this could happen for a myriad of reasons. From parental pressure to peer imitation. From inadequate exposure and information to even the system we operate where students get admitted for random courses they never applied for. However, whatever the reason, while some end up finding purpose in whatever course they study, others graduate wondering what the whole point is.

In light of this, I found that many people do many things for many reasons without proper conviction as to why they’re doing it. Some do what they do out of indifference. Others do it due to silent and obvious familial and societal pressures, even though they’d rather not. Another percentage think it’s just normal and simply go ahead without much thought for the long term implications. Only a little percentage do it because they’d thought it through, weighed its implications on their future and decided it is inarguably the right way to go.

It is usually not hard to spot the last category in the crowd of hustlers. They are intentional about every step and are result-oriented. They do their due diligence because they are not standing on the sidelines while life happens to them, rather, they have life by the horns and are charging forward with a clear vision. No, they do not know tomorrow and do not pretend to know, but they know that whatever tomorrow throws at them, the vision stands and they’ll find a way around it to get back on track. After thinking this through, I realised it is the same for the Christian race.

What on Earth is the Correlation?

When the Lord Jesus said, the kingdom of heaven is not bread and meat, He wasn’t necessarily referring to how hard it is to make heaven, I think rather, He was referring to how we can’t just waltz through the journey.

Yea, the Christian race is soft work, made so by grace, but it is intentional nonetheless. It’s a journey that requires rock-solid conviction as to whether and why you want to take it.

Many people know giving their lives to Christ is the right thing to do. They believe Christ is the only way to heaven and that we must accept the life He has provided for us if we will get to that eternal home of rest. They like and are attracted to the fellowship humanity enjoys with the Triune Deity, and this is why they give their lives to Christ. However, only a few are really convinced about their decision. These few, beyond liking the idea of being born again and the blessings that come with it, are convinced they want to take up the cross and follow Christ, come what may. They know while it is not by human power, the role the human will plays in the overall scheme of things cannot be underestimated.

The human will is what decides to take that step to the cross after the Holy Spirit has convinced of sin, and it is also the human will that determines to take hold of the grace made available when the temptation to return to the old life comes.

Men and brethren, this gives explicit answers to the questions earlier asked

While the grace of God is always more than sufficient to run the Christian race, grace alone is not enough to do it. You have to be intentional about your decision to keep going. When temptations arise, if you haven’t made a deliberate decision to stand, regardless of how much grace you have available to you, it will be all too easy to just give in and repent later. And this will turn into an endless cycle of rising and falling that could be the bane of your Christian race.

This is why conviction and intentionality matters after all! Yes, we are saved and kept by grace, but not even grace can force a man to stand when he has no will to do so.

Until you sit yourself down and realise, between yourself and the Holy Spirit, the reason why you have decided to be a Christian, you will not enjoy the Christian life or even be able to live purposefully. This is because you will be too busy rising, falling, destroying and rebuilding old bridges to realise divine purpose talk less of being eternally relevant. Of course, this determination and intentionality does not always happen at the point of salvation but along the line. However, it has to happen at some point and it won’t happen by mistake or by itself. You have to decide that eternal life is worth everything and that your Christian conviction takes the highest priority.

Then and only then, will grace be able to do what it has been provided to do.

This does not in any way imply that we are saved or kept by our own works of righteousness or sheer will. Rather, it means though we are saved and kept by grace, if our free will is not in on the deal, our Christian journey will be a messy one. God will never force His grace on any man. It behoves us to latch on to the grace He has made available and this requires the strength of our will. Reader dearest, today, if your walk with God and work for Him will take a new and better turn, you have to prayerfully decide that come what may, you are ready to take up your cross and follow Christ. Then you’ll enjoy grace like you never have.

May the grace of our Lord Jesus be with us all. Amen.

Yours in improvement,
Spirit Pen!

What to Do While in God’s Waiting Room…

2 thoughts on “When Grace Alone is Not Enough”