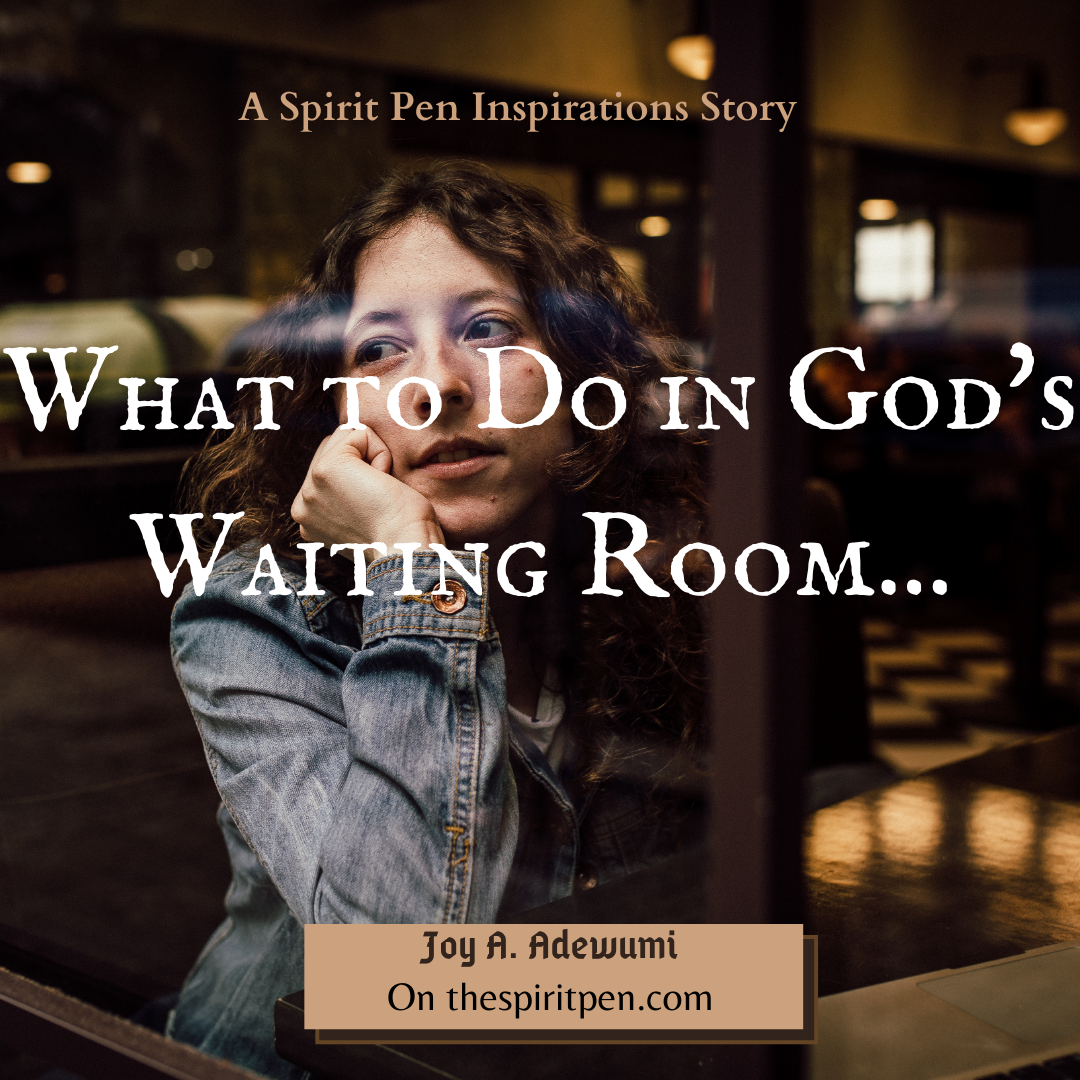 What to Do While in God’s Waiting Room…

Dear reader, do you know that your ability to wait and be patient sometimes could be a show of silent strength?

Let’s talk about strength for a bit!

Strength is not always shown through a constant flurry of activities and being all over the place all the time. Strength is not always loud and obvious, sometimes it’s silent and inconspicuous. There are moments when the true evidence of your strength lies in your ability to wait patiently.

Before we move on, let’s talk about some practical examples of these moments under discussion.

Often as Christians, in our endeavours, we do all we can and do need to do, in every sense of the word. Why? Not just because we have strong work ethics, but because we’ve been commanded never to be slothful in business. Children take after their Father and if the work of creation is anything to go by, it’s mighty obvious that we do not have a slothful Father. The fact that humanity is still trying to figure out the complexity of creation from the heavenly bodies to the human body, is proof that God did not drag His legs during creation.

Not slothful in business; fervent in spirit; serving the Lord (Romans 12:11 KJV)

We turn every stone, dot all i’s, and cross all t’s till there is absolutely nothing left undone, yet as believers, we still trust God to take the wheels and grant us favour beyond our efforts. However, have you been in that situation where it seems your efforts and diligence, no matter how detailed simply won’t suffice? That moment when you’ve done all there is to do, but it’s obvious that just won’t do? That situation when it feels like all you’ve got left to do is to agitate and be a worrywart while you wait for someone else to make an important call that could make or mar your dreams as you know them? Now those are classic examples of waiting moments.

Sometimes, God likes to school us in the act of patience so, He gives us an assignment and only reveals His plans in steps. Not till you’ve finished one step will He reveal the next. As frustrating as lessons like this might be since patience is not one of my strong suits, I find them rather comforting. Comforting that the Father thought it well to take interest in me amongst all creatures of the world. I find it delightsome that He takes His time to instruct me, assure me, teach me how to go about the work, correct me when I make mistakes, and build up my faith in Him. More especially I find it very satisfying that no matter how much I have to wait between steps, I can rest assured that I’m not stranded, rather I am waiting on God.

Knowing that the testing of your faith produces patience. (James 1:3 NKJV)

Make no mistake, this kind of situation is very different from one involving indecisiveness. You are not unsure of what next, rather you do not know what next because it’s God’s project and He’s taking the lead. It’s not a situation where you can use your initiative but you are stalling in hesitation. They are very different situations. It’s important to note that timing is a very cogent factor in carrying out God’s instructions. Many people have lost amazing opportunities because their timing was off. Many others have lost faith in God because He led them down a path but it never worked out. They never stopped to think it might have been because they missed their timing. Over and over in the Bible, we see God give clear-cut instructions to His people and give specific directives with regards to timing. Take the battle at Jericho for example. Someone could have thought, ‘Dear God, if You would defeat these people, I’m You could do it in a split second, so what’s the whole seven days thing about?’ Well, while there are times that along the line we understand God’s timing, at others, He doesn’t owe us any explanation, ours is to trust and obey and smile out of that situation at the end of the day. However promising we know the end of that waiting might be though, it still doesn’t make the waiting period less agitating.

For the vision is yet for an appointed time;
But at the end it will speak, and it will not lie.
Though it tarries, wait for it;
Because it will surely come,
It will not tarry. (Habakkuk 2:3 NKJV)

Do you know however that those waiting periods are the moments where your ability to wait patiently becomes the ultimate show of strength?

READ ALSO: I’ll Put You in Front (A Short Story)

How then do you manage the waiting moments?

You know that popular line by Bro John in the popular Mount Zion movie, Gbemi? ‘God has a waiting room and in the waiting room of God, there’s a LED TV.’ The ultimate guide to waiting on God is to do just that – wait on Him!

You’ve got to learn to wait on God prayerfully and ward off anxiety. Yea, I know that’s way easier said than done, trust me, I do. Because, if we are being honest, it’s far easier to worry, agitate, pull out your hair in impatient frustration than quietly sit as you speak to God and draw strength from His throne.

However, as easy as that may seem, it’s not healthy –spiritually or even physically for that matter. And though it may seem for the average human being, as a Christian, you’re a notch higher than the average human being. You’re not just a creature, you’re a child of God, coheirs with Christ, a citizen of God’s kingdom and you have a Father who has the universe on the tip of one finger. Beyond this identity, you have God’s special promises. You have the assurance that He’s got your back and will come through for you. You also have peace through the Prince of Peace. So, my dear, you owe it to your divine status to handle these waiting moments better than the average person.

“Let not your heart be troubled; you believe in God, believe also in Me. (John 14:2 NKJV)

Buy your copy of When the Water Falls by HEPHZIBAH ADEBOWALE

Your attitude during this waiting period weighs in heavily on how the next phase of the situation turns out. If your waiting period was spent murmuring, complaining, grumbling, and making negative confessions, you should know it weighs in on what happens next. So, you ought to think about that when next your anxiety is about to get the better of you.

Be anxious for nothing, but in everything by prayer and supplication, with thanksgiving, let your requests be made known to God; and the peace of God, which surpasses all understanding, will guard your hearts and minds through Christ Jesus. (Phillipians 4:6-7 NKJV)

An alternative to those negativities however is praying. Praying fills you with peace and strengthens your faith. It reduces your agitations and helps you see the situation the way God will have you see it and not how the average person would see it. Praying is also a means of holding God to His promise.

Take the prominent bible prophet, Elijah for example. Even after the assurance from God that rain would come down upon the land of Isreal after three and a half years of drought, after his brave appearance before Ahab and even the miracle of calling fire down on mount Carmel, he still returned to his closet to pray down that rain. He didn’t just pace the whole room as he bit his finger and wondered if God had forgotten his promise. He went into his secret place and prayed till he got news from his servant that there was a little cloud over the sea.

Reader dearest, when you’re in the waiting room of God, nothing works quite like praying.

But those who wait on the Lord
Shall renew their strength;
They shall mount up with wings like eagles,
They shall run and not be weary,
They shall walk and not faint. (Isaiah 40:31 NKJV)

Positive affirmations work best when you quote the direct promises of God from His written and settled word. The scriptures say our faith is built up by repetitive hearing of God’s word. Hearing is good, but confessing is even better. “And they overcame him by the blood of the lamb and by the Word of their testimony…” Rings a bell? The written promises of God are ours for the taking and they are the currency of exchange at the throne of Grace, that’s the reason God commanded us to bring forth our strong reasons. What are our strong reasons? The fact that God exalts His word above His name and so, when we speak those words, not only is our faith increased, but we also remind God of His promises and register our faith in Him at the throne of Grace.

And they overcame him by the blood of the Lamb and by the word of their testimony, and they did not love their lives to the death. (Revelation 12:11)

Finally, on this list, is an encouragement to praise God even if you haven’t seen the physical manifestation of your request. What better way can you express your faith than thanking God for doing what you’re yet to see He has done? Praise God in past tense as though your miracle is done. Now, that is faith – the substance of things hoped for; the evidence of things not seen.

He did not waver at the promise of God through unbelief, but was strengthened in faith, giving glory to God. (Romans 4:20 NKJV)

Reader dearest, like Bro John, as he taught that class in that movie, this beautiful writer is also in the waiting room of God. It’s been a rather tough period and she hasn’t been handling it particularly well, but as she pens down this timely message from the Spirit of God, she’s encouraged to turn her eyes on Jesus and wait regally in His beautifully furnished waiting room. What do you think about joining her on the sofa to watch something nice rather than pacing the whole length of the room repeatedly and wearing out the soft plush rug?

Want to get quick updates? Join my Telegram Channel!

Here’s a song I love to sing even when I’m still in between a rock and a hard place:

He made a way,
When my back was against the wall and it felt as if it was over,
He made a way and I’m standing here,
Only because he made a way.

Yours in improvement,
Spirit Pen!