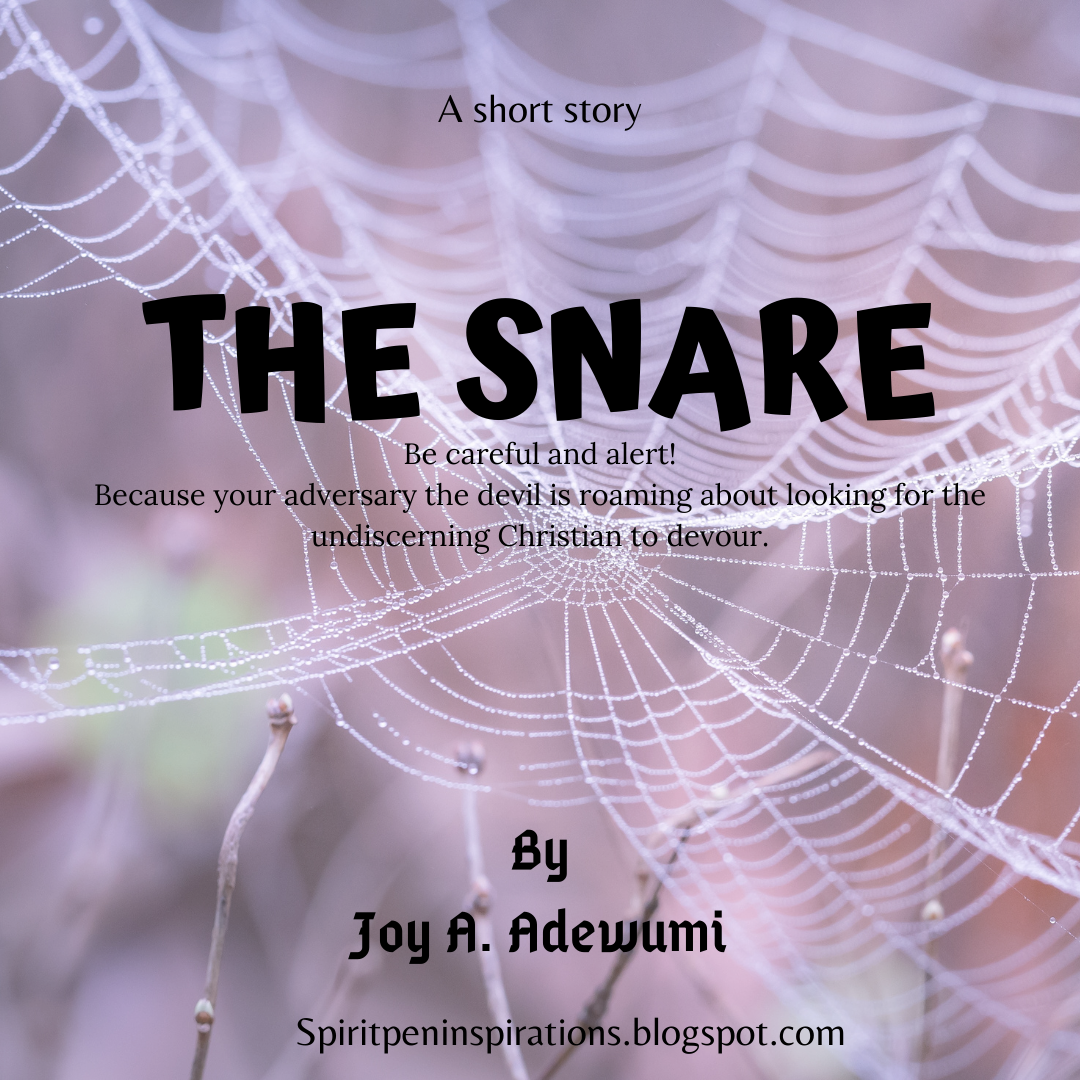 THE SNARE- A Short Story

When the Pastor mentioned something about discernment two Sundays ago, I honestly didn’t pay much attention.
The mention struck a chord of warning in my heart, leaving in its wake a burden to pray, but I felt there were more important points to pray about and only mentioned it in passing.

Now, as I stared at the young girl in front of me, I knew that slight mention in the sermon must have been for me, but I’d missed my chance.

‘He’s the one! I swear!’ Deborah cried with fat tears sliding down her cheeks as she pointed at me.

The Principal’s features were beginning to cloud over and her mother’s fair-complexioned face was almost beet red with anger.

‘He’s been doing it since the beginning of the term.’ She accused as more tears rolled down her face.

Oh my word! How can a fifteen year old tell such boldfaced lies and act so well while at it?!

I was not a pedophile for Pete’s sake! How could I touch a girl, who was my niece’s peer. And was the Principal seriously buying this?

Oh yes! He was. Never mind the fact that he’d known me longer than he’d known the kid or that he had always openly appreciated the grace of God upon my life.

I couldn’t blame him though, with the act Deborah was putting on and the increase in cases of teachers taking advantage of their students, I probably would have done the same in his shoes.

‘When we began our after-school lessons earlier this term, he said he preferred the class at the rear end of the halls. I didn’t think he had any ideas, until he began getting close and asked me not to tell anyone. I didn’t because I was scared.’ The girl concocted further, probably noticing that the others were buying her lie!

The classroom in discussion was the one in which I was class teacher and the only room I had a key to. It only made sense that we held the tutorials there. Why was she making it look like I picked a strategic place for some crime? She must have thought this out well! Since when? I could only wonder. And my spirit answered, since that sermon two weeks ago.

‘Mr Awosina, what do you have to say to this?’ The Principal asked barely keeping it together from the looks of the tight fist he had made.

‘Sir, I have absolutely no idea-‘ I was saying when the girl’s mother cut in, her voice booming against the walls and frames as she shook her fingers threateningly in the air. Click here to Buy The Reunion and Get Spring free

‘Absolutely gba enu e ni be yen!(‘Absolutely’ slap you there!) Are you mad?! You think you can take advantage of my daughter and get away with it? God punish you for that lie you were about to tell! Ewo, epe ni mo ma se fun gbogbo yin be se wa yi!  (See, I’m going to lay curses on all of you, as you are.) All I want is for you to take responsibility for that b*stard in her stomach! Shikena!’

My mouth dropped open in shock and the sudden limpness of the Principal’s fist mirrored my astonishment.

Jesus! Heavenly Father! The girl was not only accusing me of taking advantage of her but also of getting her pregnant! My God! How was I to get out if this one?!

As the girl’s mother issued out some more heavy threats dotted with a few colourful words, I remembered my niece’s words.

She’d been home for the midterm break the previous weekend and because she schooled in a different state and the school calendars differed slightly, our midterms didn’t align. She’d cajoled me into passing the nights at her parent’s place for the duration of her midterm and just like every other request she’s ever made, I couldn’t refuse her.

‘Uncle Paul, it’s quite late.’ She commented when I returned around 6pm on Thursday. ‘Did you stop by somewhere or are you giving extramural classes? I thought you don’t do those?’ She’d asked.

‘Well, the student I’m tutoring really needs help and the pay is very good, so…’ I let my words trail off as I shrugged.

‘I don’t know why I feel uneasy, just be careful.’ She’d warned simply.

Once again, like the message from the sermon, the Spirit nudged me to pray about the issue and take my niece’s words more seriously, but I shrugged the feeling off, thinking Gifted, my niece was just being unnecessarily concerned.

Now, as I imagined how things would go from here, the rumors that were probably flying around the school already and the fact that I had no witness, to confirm my defense, I wished I had prayed about the issue of discernment and had taken Gifted seriously. That way, I would have seen this coming and found a way out.

Suddenly the Principal’s dull eyes came alive and a light came on in my failing heart! I hoped this was good.

‘Deborah, did you say you had all your classes in that class at the end of the hall and that’s where all these happened?’ The Principal asked.

This girl… Wow! If only she could be this smart with her academics, she would probably be a straight A-student. She must have noticed the change in the Principal’s countenance and her voice shook uncertainly as she stammered.

Looking from me to the Principal and then to her daughter, Deborah’s mother had an inquisitory look on her face as the Principal shot his lithe frame out of his chair and charged out of his office, saying,

‘Follow me!’ I followed eagerly behind and could tell from the footsteps behind me that the others too did.

Students and teachers alike stared after us as we passed by and I knew they’d overheard the woman’s shouts! I couldn’t even be bothered about being embarrassed at the moment. Because that would be the least of my worries if this issue didn’t get solved. I just needed God to forgive my neglect and get me out of this mess.

The Principal made a beeline for the mini ICT complex down the block and exchanged a few words with the operator when we got there. Soon, videos of my classroom during school and after school hours rolled in, and we all watched as recordings of the after-school hours when I taught Deborah played. We schemed through the videos for each school day since I started tutoring her till the previous day, for almost an hour.

I didn’t even know my heartbeat was moving at a mile per minute till it began slowing down and all my faculties returned to normal. I sunk into a seat as the Principal released a very audible and exaggerated sigh.

We both turned to mother and daughter and watched as the woman turned on her daughter, calling her all the names in the book, terming her disgraceful and disappointing.

As the drama unfolded, I was somewhat glad for the woman’s loud voice, it meant as many people as heard her earlier announcement could also hear her now and I rubbed a palm down my face in relief.

‘Thank God for that CCTV recording. It was installed earlier in the session when the issue of picked class locks arose. The majority of the school had no idea how the issue was solved but so that cases like this can be unraveled we kept the fact that all classrooms and offices are under surveillance secret.’ The Principal explained.

‘Wow! I thought that accusation would be the end of my life as I knew it. And the funny thing is I’ve been getting some sort of warning, but I wasn’t discerning!’ I replied.

‘Ha! Discernment! I don’t joke with that ooo! It is suicidal for a Christian to lack a discerning Spirit. I learnt this from the story of Gedaliah the son of Ahikam in Jeremiah chapter 40. The chapter even stuck with me because if its importance. You should read it. That man died because he was undiscerning. You are fortunate God made a way of escape for you. Many people never got a second chance. Mr Awosina, go and sharpen your spiritual discernment. Your adversary the devil is roaming about looking for the unguarded Christian to devour, so you really can’t afford to be undiscerning. The next time, you might not be so lucky.’

I nodded soberly to his words and mouthed thanksgiving to God for sparing my life and reputation.

This message is certainly for someone. Please, sharpen your discernment.

I know, some one is probably asking:

‘How exactly do I sharpen this discernment?’

What you do is simply ask your Father in heaven, who withholds no good thing from His children. And make sure to obey as the instructions come.

I pray we won’t be victims of lies and conspiracies in Jesus name. Amen.

If you’ve been blessed, please make sure to leave a comment for me below in the comment box, before you leave.

Yours Truly,
The Girl with the Winning Smile,
Spirit Pen.