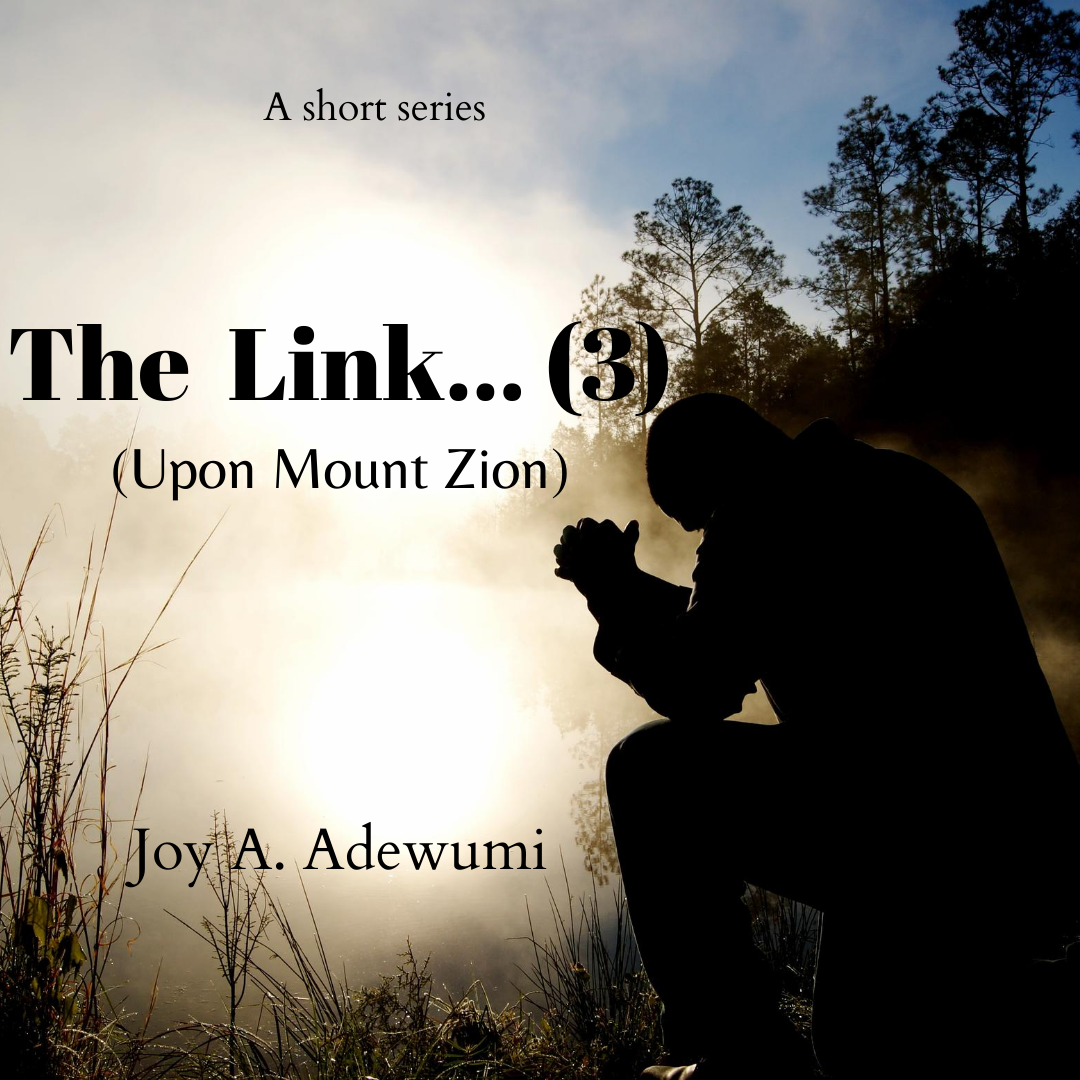 The Link 3 (Upon Mount Zion) – A Short Story

That night, Mabs returned again to the cross and we took quality time throughout the weekend to deal with her struggles with the flesh in the place of prayer.

The Bible says upon Mount Zion, there shall be deliverance and the house of Jacob shall possess their possession.

Mabs and I turned our apartment to our Mount Zion that weekend and deliverance rained like showers.

We warred using various songs that charged up our spirits and kept us at the altar.
One particular song that played almost nonstop on our phones throughout our mini-retreat was “Kill my flesh” by Chevelle Franklyn.

“I used to walk, talk, look just like You
And You were the one before trouble came,
Always kept praying.
Now I was going places I wasn’t sent,
Was going through some changes,
Staying away from You, to distraction I was true,
My thoughts of you were few.

Lord, kill my flesh, break my desires.
Lord help me thirst after your righteousness.
Kill flesh now, Lord here I am,
I don’t wanna be the same,
I thank You I’m not that girl again.”

The glory of God was palpable in the house and I felt like I was in the fourth heavens.

We delved into God’s word, taking hold on His promises of salvation and  deliverance and making commitments on sanctification and consecration of our hearts and bodies. We also prayed in the Spirit using these Scriptures which was our double-edged sword.

Mabs and I lost ourselves in praises for hours on end and at a point I could literally see the devil and his cohorts flee with their tails between their legs.

I knew the devil was already fighting a lost battle when at some point, during a meal, in between prayer sessions, Mabel said to me,

‘A.Y, do you know what my greatest fear  was each time I fell?’ Buy Before We Got Married

‘It’s the fear that despite my loathing for the sin and the resolve in my mind that I would never go near another dirty picture; I probably will still fall because it was a force I couldn’t win against.’

I was going to reply as usual, but I sensed a ‘but’ and  held my breath.

‘But, earlier as I prayed, a hymn came to me. “Standing on the Promises”. It didn’t feel quite apt, but I searched for it and as I went through the stanzas, I came across what the Holy Spirit wanted me to know. It was the fourth stanza.’

Immediately, even before I could whip out my phone to search for the song, she started singing with her clear alto voice, enunciating the lyrics properly.

‘The moment I sang that, I got not just my answer, but my victory. And I sang it over and over, not just for myself, but for the devil also to hear and know that I had realised he had no hold over me.’

I just shook my head in wonder as I stared at my friend. Truly, the devil chose the wrong girl to mess with. She wasn’t done though.

‘Chai! When I read that A.Y, I cried like a baby, because I realised I kept falling not because the sin was stronger than I, but because I’d forgotten that I am God’s and except I walk out of His fold, no force, no matter how strong can pluck me from His hands.’

Tears sprang to my eyes and I dabbed at them with my knuckles before they could fall. We had been given the victory.

It was an ‘awe-mazing’ time in God’s presence and I knew the devil had failed. By the time the weekend was over, I could see the beautiful transformation in Mabs. Even I felt reinvigorated.

As the days went on, work and other commitments came in to the picture, and we didn’t have the luxury to spend most of our time in prayer and Bible study, but things got better.

Whenever Mabs felt stirrings and we were both at home, she’d rush to me and as her accountability partner, I always made sure to make time so that we’d pray together and gist about other stuff, turning away her attention and concentration from her current dilemma till the stirrings ceased.

If we were apart, she’d simply put a call through to me and we’d repeat our routine as much as time allowed.

She was always giddy with excitement and full of thanksgiving after each conquest and my joy knew no bounds.

It was for this purpose I was called into God’s vineyard. And I felt fulfilled knowing Satan had lost his hold on my friend… Forever!

About two weeks after Mabel came
clean and we had that retreat, I returned from work one evening to find her stretched out on the living room sofa.

Her face was wet with tears and her phone was on the floor, some metres away from the chair.

She didn’t need to say a word. I collapsed on the chair just by her bent knees and rubbed my palms across her arm. She shook her head and said,

‘A.Y, this is useless, I’d never be free.’ I bit my lips for some seconds and then replied,

‘Mabs, I can only imagine how you feel,  but just because you were a counselor does not make you superhuman. Don’t overestimate yourself.

‘Can you count how many of your knee-deep-in counselees who didn’t have a relapse at least once? Did you allow them give up just because of that?

‘I know this is not sports where you lose some and win some. You want to be free once and for all and trust me, I want that too! I want you to know however that one defeat does not mean your efforts are useless. It does not mean God’s grace is impotent either.

‘Rather than let negativity proceed out of you, why not learn from the series of events that led to the fall this time. Identify what triggered the arousal and take it to God in prayers. That way you won’t make the same mistake twice.

‘God has not given up on you and won’t. So don’t you dare give up on Him, young lady!

Buy When the Water Falls

The next time I came home to find Mabs in a bad form, it was for a whole different reason. One that not only had me doubling over in laughter but had my heart screaming,

‘Babes, what are you looking for so frantically?’ I asked as I entered Mabs room from where she had replied my greeting.

She grunted in frustration and then replied,

‘Okay, so I was feeling the stupid temptation and I called you repeatedly, but apparently you were busy.
So, I did the only thing I could think of, I slid my phone far under this bed and went for a stroll.’ She was very irritated.

‘What?!’ I exclaimed as I dropped my bag and doubled over in laughter.

‘A.Y, it’s not funny. I was desperate, okay? I had to do what I had to do.’ She replied as she tried shifting her heavy bed frame.

‘I’m not laughing at you. I’m just happy! Overjoyed really! I’m so proud of you babes!’ I jumped as I hugged her frame from the back and sighted her beautiful smile. That rewarding smile of victory!

‘The devil must be licking his wounds right now!’ I continued as I released her and gave her a hand and we both moved the bed some metres, till we found the phone.

Later that day, as we both prayed, the word of the Lord came for Mabs and with a heart full of gratitude to God, I delivered it:

READ ALSO: Even in Murky Waters…

‘Mabs, hear the word of Lord concerning you.

‘He said he has renamed you a priest of the Lord and you will be called a minister of God.

‘For your shame He would restore unto you double blessings and give you beauty for ashes. He’ll give you the oil of joy for mourning and the garment of praise for the spirit of heaviness; so that you would be called a tree of righteousness, the planting of the Lord, and so that He would be glorified in you.

‘He said He will restore to you the years that the devourer has eaten, and you will eat in plenty, and be satisfied, and praise the name of the Lord your God, that has dealt wondrously with you: and you will never be ashamed.

‘He’s taking you into a greater dimension in your ministry and He’s set to turn this unsavory experience into a tool to redeem souls you would have otherwise not being able to reach. Your experience will be a testimony that will bring many youths to the cross.’

‘Mabs, there’s something I still don’t understand. If I were to make a list of curious people I know, you wouldn’t even place anywhere near top 10. So, how was it that you opened a random link that was apparently not even meant for you?’

Mabs sighed over her meal and dropped her spoon.

‘It was from Lanre, so, I didn’t make much of it. I just opened it carelessly.’ Buy The Reunion and get Spring free

‘How many Lanre’s do we both know?’

‘Lanre, your fiance? Youth Pastor? Chief Keyboardist?’ I asked. Mabs chuckled, she apparently found this funny but I didn’t. Or maybe, there was something obvious here that I wasn’t getting.

Didn’t she just imply that the nasty link that had turned her life upside down had come from her fiance, who was also a youth pastor and the chief keyboardist in our choir?

Why then was she chuckling?

Don’t tell me there’s another twist to this story!

This episode was very important because I really needed to break down into practical steps, proven means by which a Christian can overcome an addiction.

It didn’t seem enough to just show that Mabel was determined to overcome and had found a confidante and accountability partner in A.Y. The Spirit of God inspired me to move one step further to share how in our daily lives, we can win over sin and flesh.

I hope you’ve been greatly blessed by this episode. Please, don’t forget to click on the share button and drop your thoughts, comments and contributions in the comment box below.

The grace of the Lord be with you. Amen.