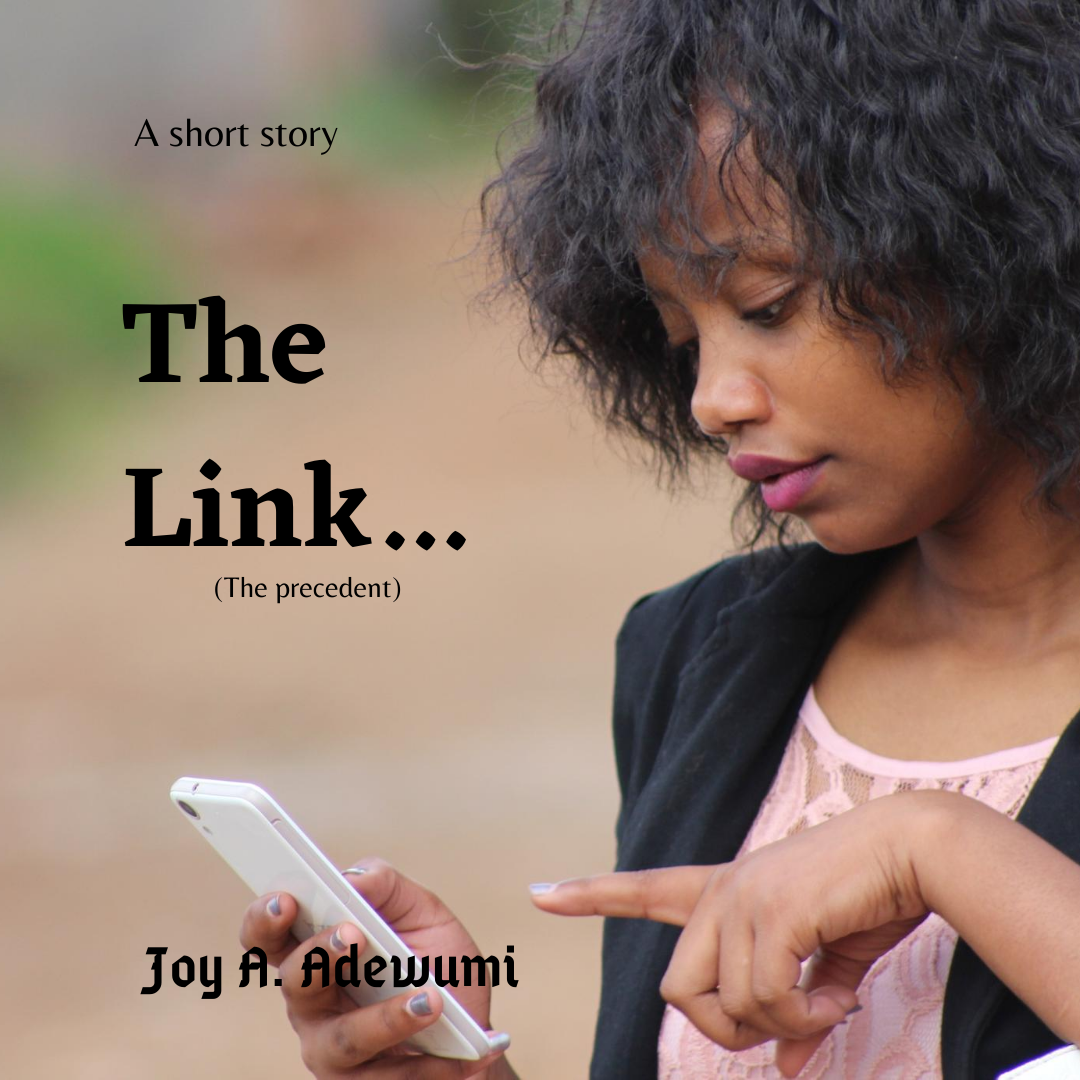 The Link 1 (The Precedent) – A Short Series

‘Hey babes!’ Mabel jumped at the sound of my voice, and I watched as her phone slipped from her hands and hit the rug with a small thud!

‘Just thank God it’s a rug, Mabs. What on earth has got you so jumpy?’ I asked as I walked towards her, wanting to pick the phone and join her on the bed. But she beat me to it as she dived to the floor to grab the phone with a nervous laugh.

My brows furrowed into a deep V at her jumpiness. What could be so private?!

‘So… What were you up to?’ I asked as I dropped my bag and sat on the bed where she was frantically tapping and swiping away on her object of fixation.

She looked out of sorts…

‘Uh… Mmn? You… You said?’ She asked as she kept tapping, and then glanced up at me and said,

I let out a sigh and turned to her squarely and asked with narrowed eyes.

‘Babes, you sure say you okay so?’

‘Yea, yea! I am! I just had something to finish off on my phone.’ She replied as she tapped some more and  finally put out her phone’s backlight.

‘Yea, I can see.’ I replied sarcastically as I shook my head at the weirdness of it all.

‘So, how did it go?’ She asked dully without the usual excitement in her eyes.

‘The retreat?’ I had confirm. The Mabel I knew would be literally bursting at the seams to hear all the gist.

‘Mmmn-mmn.’ She hummed and nodded her affirmation and I disappointment washed over me like tendrils of water from the shower. So much for all my excitement to share all that had gone down with her.

‘Well, it was great!’ I replied with a shrug.
‘You know, a few people did ask after you. I understand why you had to skip it, but it just wasn’t the same without you!’

I had just returned from the last leg of a three-day Christian ladies retreat and it was just about the best thing that’d happened to me that month. Mabel and I should have gone together…as usual, but she’d needed to put in some extra hours at work and knowing how those could be, I had no counterargument. It didn’t mean I was happy about it though.

There was just something about both of us going to those meetings together and coming back recharged and ready to take on the world again.

It felt odd this time being alone, and I couldn’t help feeling we were on very different frequencies for the first time in so long.

Talking about the retreat just wasn’t the same when one of us wasn’t there, but I shook off the feeling and passed my phone to her.

‘There! Check for the audio messages, I added a prefix to them. CLR is what you should check for.

Then I excused myself and left for my room.

‘Thanks Sugar! You’re the best!’ She called after me and I simply shook my head with a smile playing on my lips.

Of course, she was excited! What was I thinking?

She probably felt bad too that she had to miss it.

Two nights later, I woke up to use the restroom Mabel and I shared in our two-room apartment, and I noticed the light was on in there and could tell Mabel was in there.

Just as I wanted to make a detour into the living room to wait for her rather than idle by the door, I heard a light groan and blinked rapidly, wondering if I actually did hear that.

Then a small sigh that felt too much like a moan followed and the toilet flushed. Few short seconds later, Mabel stepped out.

Was she having diarrhea? Did she have a constipation?

Those were the questions on my lips when I noticed her slight unsteadiness and the phone in her hands.

She jerked at the sight of me, almost tripping and exclaimed as her unoccupied hand flew to her chest.

‘Sorry, but babes, it’s-‘ I stretched my hand towards hers, wanting to check what time it was on her phone but she jumped back hiding the phone behind her back.

What on earth?! Why was she so jumpy and jerky?!

‘Aha! Relax now! I just wanted to check the time. It’s apparent you’ve been at it with that phone all night and haven’t even gone to bed. Are you ‘purging’?’

‘Huh? Hmmn… No! No, I’m not purging. Thank you.’ She replied as she glided past me and all but ran towards her room.

I didn’t miss what looked like her body spasming slightly as she rubbed her legs together and entered her room.

Was that…? No, no, it couldn’t be. I convinced myself with a chuckle as I stepped into the restroom.

I argued with myself till I went back to bed that night.

I just couldn’t shake off  the vibes I got from that night’s encounter.

It was the same one I knew all too well from many nights of chancing upon teenagers and young adults in a boarding facility I’d lived. A boarding facility that housed students from my uncle’s postsecondary tutorial outfit where I had worked briefly.

Memories of one teenager or the other staggering beneath the force of the pleasure that had just wracked through their lithe frames flitted through my head as I willed myself to sleep.

Memories of sniffing teenagers tired of their addiction and needing help coming into my room day after day.
Just wanting a release from the binds of lust that held them captive and submissive.

It couldn’t possibly be. Mabel was a fellow teens minister. I knew her to be a fiery instrument God has been using to raze hell for years.

As a matter of fact, I’d met her at a socio-spiritual teenagers conference, where she had preached deliverance to many youths yoked to the power of hell and sin.

It had to be something else…

It had to be something else, even if she had certainly being off her game recently.

Those were my thoughts as sleep finally came that night.

I hated Saturday laundry. For me it took the fun off my weekend and so I had a routine of doing my laundry on Fridays before finally settling in to enjoy my weekend.

It had to be the delivery guy. Mabel and I had ordered dinner from our favorite- Ella’s Cuisine, on the other side of town.

Suddenly I heard my phone ring and I rushed to get it in the living room where I sighted Mabel getting the delivery.

By the time I got to my phone, the call had ended. A ‘flash’. It was Ayanfe, my youngest sister. Set awon professional flashers geng.

Then, I glanced at Mabel’s phone and saw she had been seeing a movie.

I picked up the phone and called out, just as she finished with the delivery guy and shut the door behind him.

‘Mabs! You no try ooo. So, you started chilling without me, abi?’

‘Well, I’m not the one who-‘ She was saying just as I took a second look at the paused scene on the phone’s screen and did a double take.

In a split second, Mabel had dashed towards me and snatched her phone out of my slacking fingers.

I blinked rapidly as I stared at my friend and asked,

‘Mabs! What was that?’ I was truly bewildered. I refused to believe my eyes.

‘It was just a scene, something I was going to fast forward before our meal arrived!’ Mabel answered offhandedly as she tapped away on her phone and put out the backlight.

I shook my head at her attempt to throw me off the scent. She should have known better than give that amateur excuse.

I swallowed hard and faced my friend square in the face and asked again.

Then suddenly, something shifted on her countenance and she retorted,

Then she turned back, picked one of the meals and stalked out of the room as my jaw dropped!

What in the universe just happened?!