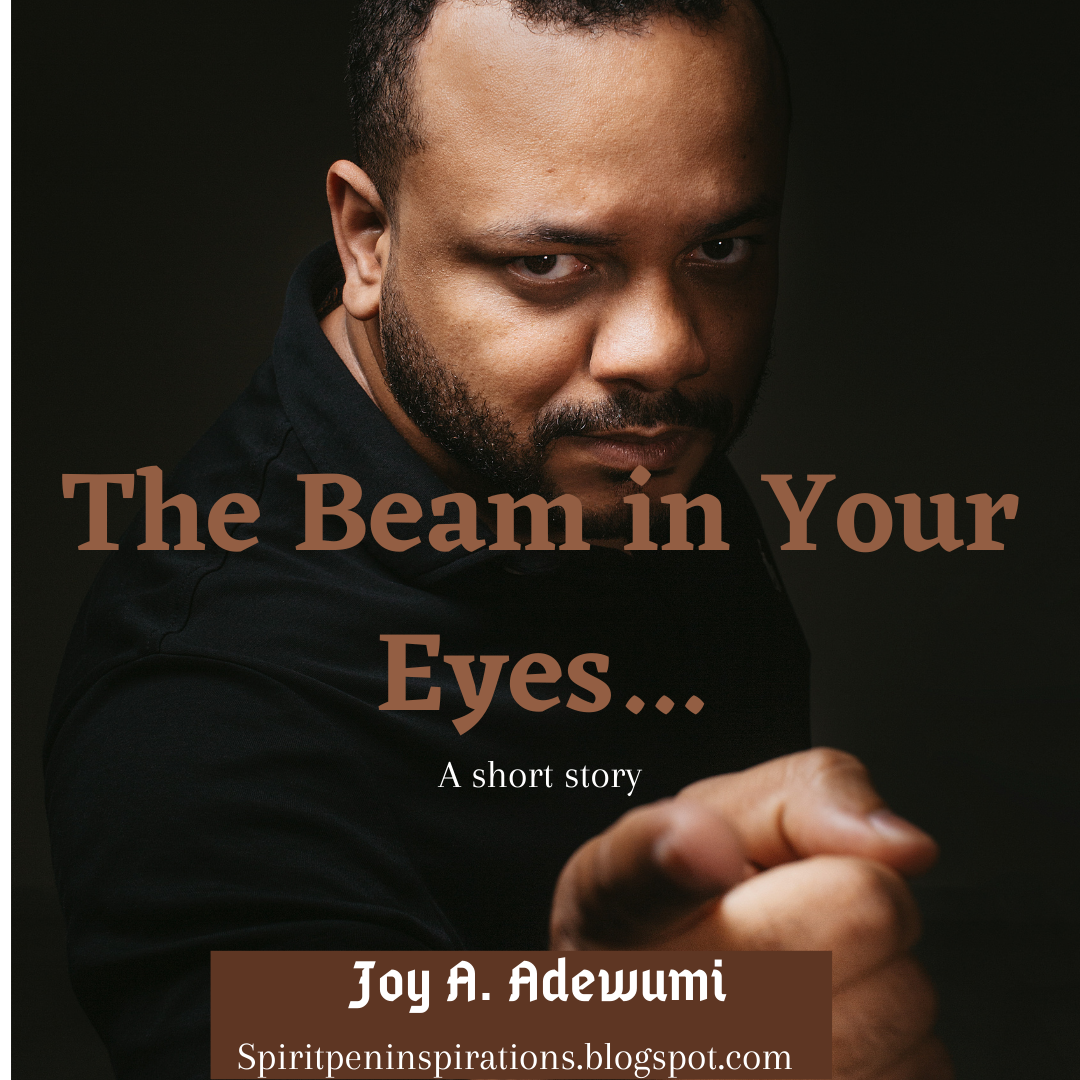 The Beam in Your Eyes – A Short Story

‘Oh my days! Is that- Wait! Are you kidding me right now?’ Dad threw his head back, howling in laughter at my reaction as I stuttered at the sight of my cousin.

I hadn’t seen the bloke in ten years and now, the eight year had grown into a tall, lanky and manly youth.

‘Look at you!’ I exclaimed as I finally made a coherent statement and opened my arms inviting him in for a hug.

Maja laughed at my reaction and swaggered into my arms.

The kid smelt of manliness and expensive cologne. Wait! Did this mean I was old?

‘When did you grow so… I don’t know, manly, I guess?’ I asked as we let go of each other and I took in his appearance more carefully.

The ripped jeans, the tinted hair, the studded ear, and wait! Were those pink lips? Lip gloss?!

READ ALSO: Have You Found Honey?

I didn’t know whether to cringe or laugh.

What on earth?! Well, he did grow up alright!

‘Couz! A decade is a long time you know. Long enough to grow taller than you,’ he replied as he made a show of looking down at my temple.

I chuckled despite myself. But wait! What was I supposed to make of his appearance? He looked… Well… Kindda…

‘Alero!’ My mum called, interrupting my train of thought. And that was good, because I might have ended up tagging him something that would have made me feel guilty…in my mind.

‘Ma!’ I answered, turned to Maja, excused myself and headed to the kitchen.

‘Mum? You called.’ I said as I entered the kitchen.

‘There you are. I missed something in my grocery shopping. Can’t believe myself. Can you please help me get some tumeric powder from Mummy Ibeji?’

‘Sure mum, but have you seen Maj-‘

‘Yes, I’ve seen him. I drove him here from the park remember? But before you start your analysis, please run my errand first.’

I twisted my lips and closed the door a bit too forcefully- okay, maybe a lot- as I exited the house through the kitchen back door, which also doubled as the building’s back entrance.

She could have at least sounded a bit more polite, right? Not so snobbish.

All thoughts of my cousin’s appearance forgotten, I mulled over my irritation and got even more irritated and hence cranky as I realised that I’d once again acted on my irritation.

Wait! What was wrong with me?!

Why couldn’t I just be calm? Why did I have to get so easily irritated and be so testy?

Each time something happened and I reacted crankily, I’d realise what I’d done a few minutes later only to beat myself up…again, for not being calm.

Would I ever win over my temperament? My mood just went downhill as I realised I’d lost to my weakness again, and I returned to the house with the purchase, looking surly and moody.

My mum took one look at me and shook her head. That struck a cord but as I opened my mouth to say something I would have definitely regreted after a few seconds, Maja saved the day!

‘Mummy, well done ma. Can I help you with anything?’

For someone that looked…well, tout-ish, he sure had some manners. The same manners I’d almost lost just a few minutes ago, like every other time I got testy.

‘Oh, thanks dear! Don’t worry, tonight you’re a guest. Tomorrow, I’ll put you to work. I hope you won’t be sorry you asked.’ Maja laughed good-naturedly and I smiled slightly. He didn’t seem to be half-bad, so why did he look that way?

‘So what’s the story?’ I asked as Mum and I sat idly in front of the TV the next day, while Dad took Maja out for some guys’ time.

‘What story?’ Mum asked, but I knew she knew what I meant.

‘Maja. He seems like an okay kid! Between offering to help and all he did around the house today, he doesn’t fit the bill.’

‘What bill?’ Mum asked again as she threw a piece of popcorn in her mouth.

‘Muuuummm?’ I whined at her dodge tactics.

‘Well, you should speak English if you want me to understand, abi?’

‘You just said he’s an okay kid, so what are you saying now?’

‘Yea… He’s an okay kid, but that look is so not okay! It’s absolutely unchristian.’

‘Okay sweets, if we’re going to be discussing what is or isn’t unchristian about a person, I hope you’re ready to stand in as a backdrop for comparison,’ she said glancing at me.

‘What are you talking about?’

‘That kid would have been perfect in your eyes were it not for his appearance, no?’

‘Not just my eyes, anyone’s eyes, mum,’ I countered.

‘Okay, but I hope you won’t get offended if I say you’re just about the same.’

‘I’m very close to getting offended ’cause we’re certainly not.’ I refused, placing my bowl of popcorn on a stool nearby.

‘Prove it! Make a contrast.’ She demanded as she funnelled pieces of popcorn into her mouth nonchalantly.

‘What or who’s to say he isn’t except he admits it?’ She asked as she chewed.

‘Mum! What are you saying? No one who is truly born again would look that way?’

‘Well, I know very many people who would argue also that no one who is truly born again would be as touchy, testy and reactive as you are.’ She quipped quietly.

‘Touché Mum.’ I replied, my voice going down several octaves.

She nodded her head and said,

‘Honey, you might be all of that, but I know your testimony is genuine, and I know you’re working hard under the Holy Spirit to have a Spirit-controlled temperament. However, someone who meets you for the first time, when you’re in one of those moods, might argue vehemently otherwise.’

‘So, are you saying his look is allowed? For a Christian?’

‘Hmmnn… When we’re talking about living an exemplary Christian life, free from anything the devil or other accusers can pick on, which of course is what Christ requires, his look certainly doesn’t fit, but honey, neither does your attitude.’

I blinked rapidly at how she turned the topic on me again.

‘Why do you keep coming back to me?’

‘I keep coming back to you because you’re trying to point out the mole in your cousin’s eyes, whereas there is a huge beam almost blinding yours.’

‘Maja does have a story like you asked. He’s a teen and he wants to belong. He only recently turned like this. He believes his look has got nothing to do with his faith, you know, the same old. I guess his mum reacted like any would and he remembered us whilst thinking of an escape route from her nagging. He insisted on visiting and my sister thought it was a good idea. Maybe we could talk some sense into him- her words.’

Mum was right. Maja’s problem was a mere mole in light of mine. I knew with lots of prayers and the help of the Holy Spirit, it would only be a matter of time before my parents would open his eyes to the stance of the Scripture on his appearance and looks.

I, on the other hand, had a real attitude problem that I’d been battling for years. And though I wasn’t the same as several years ago, I knew I still had a long way to go. And isn’t attitude everything?

‘Mum?’ I called and she answered me absentmindedly with her gaze fixed on the TV.

‘Thanks. I could have ruined the work the Holy Spirit is set to do on him, if I had acted or talked anyhow. Thanks for making me see this.’

‘It’s okay. Although, I wonder where it flies to when you get all temperamental and reactive, but basically you’re very emotionally intelligent. I trusted you not to say just anything to him.’

‘Awwn… Thanks for the vote of confidence, mum. And thanks for not crucifying me for my attitude.’ ‘Oh, come off it! We all have one thing or the other we’re working on in our lives. Some are just more obvious than others, the more reason why we can’t point fingers.’

I smiled at her as we both turned our attention back on the TV series we were seeing, one that was now showing snippets of the next episode. I hazarded a glance at Mum and she turned an expression of horror on me.

I just succeeded in making her miss the bulk of that day’s episode. And it was her favorite series. I couldn’t help laughing at her expression though. It was epic!

Don’t misunderstand me, there’s absolutely nothing wrong with a correction made in love, but outright passing of judgement on people’s spiritual states is overkill.

Next time, before you charge at a fellow, eager to point out what and what needs to be worked on in his life, do try to consider your own shortcomings. Then, think of how you’d rather you were corrected.

Don’t ignore the beam in your eyes, while you point to every James and John, the mole in their own eyes.

Work out first, your own salvation with fear and trembling.

The grace of our Lord Jesus be with us all. Amen.

If you’ve been blessed by this piece, kindly drop a comment for me below.