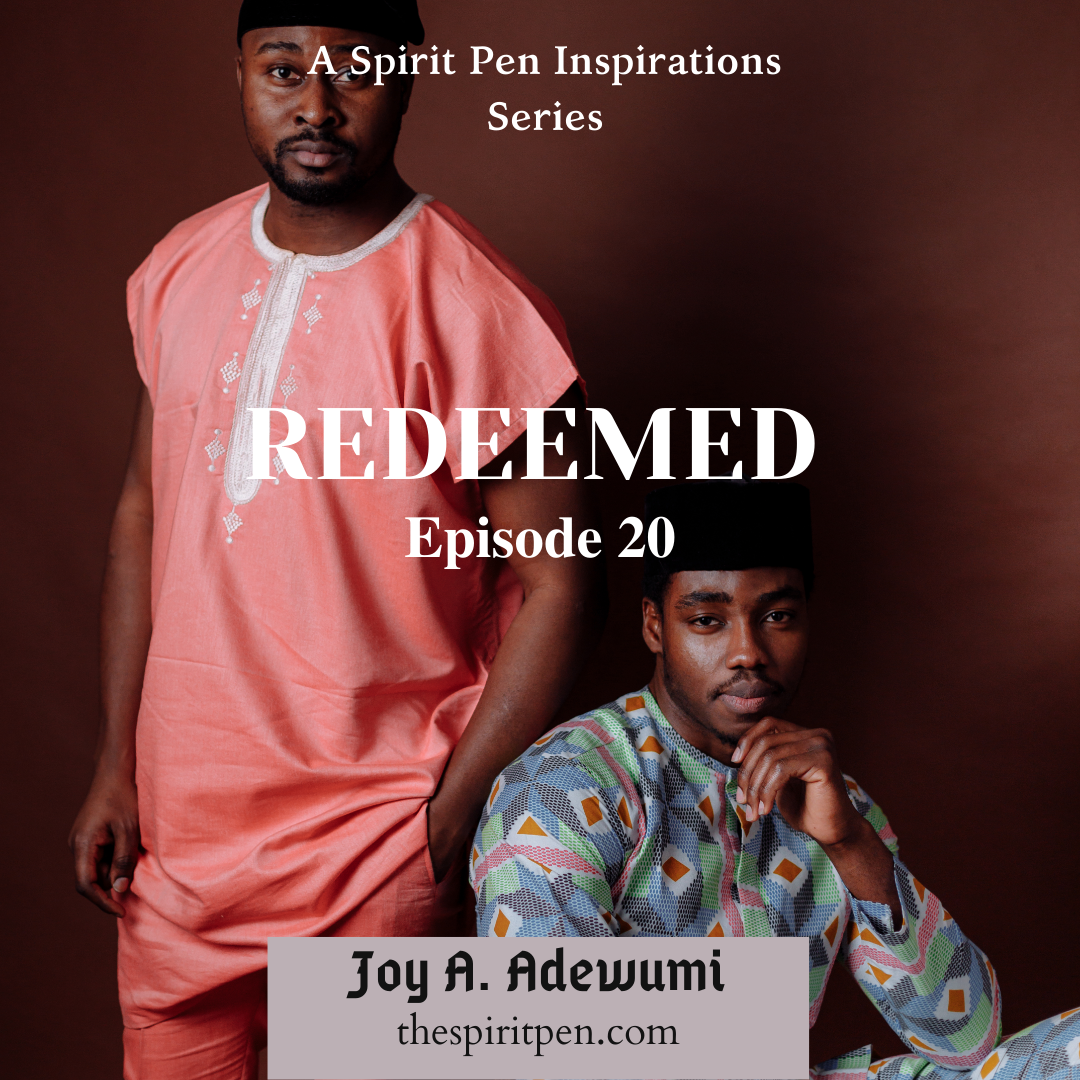 WRITTEN BY JOY A. ADEWUMI

‘Hi! Uhm… No. Praise God, I think?’ I stuttered glancing nervously at the pastor whose sturdy presence just a few feet behind my lanky frame gave me some measure of support.

The congregation laughed and surprisingly, my bunched muscles loosened and I chuckled into the microphone. This people didn’t look like they were waiting for a speech. They looked on eagerly like they just wanted to hear my experience and since relating experiences through storytelling was what I did for a living, I could certainly handle this. I just had to start from somewhere.

As I wondered where would be a good place to start, I made the weirdest request even before I had a chance to think it over. I humbly asked the choir to repeat their rendition, since it felt like the perfect place to start this story.

I was considering taking back my rash request when I glanced at them and saw that they were already distributing microphones to certain members, as they all stood up at their seats just by the podium, ready to sing.

READ ALSO: EVEN IN MURKY WATERS – A SHORT STORY

I sent an apologetic look to the pastor and he simply smiled.

Then they repeated their wonderful rendition of the song I had now taken as my new favorite: Heaven Came Down!

As they sang the divine lyrics that resonated so loudly with my spirit, I swallowed back on thick emotions and barely held back errant, burning tears.

Oh, what a wonderful, wonderful day,
Day I will never forget,
After I’d wandered in darkness away,
Jesus my Savior, I met;
Oh, what a tender, compassionate friend,
He met the needs of my heart,
Shadows dispelling with joy I am telling,
He made all the darkness depart.

That was all the part I needed to hear as I smiled and gave my thanks. The whole church clapped and my vocal chords were let loose. ‘My name is Roland. And maybe, some people here might recognise me, but are wondering whether or not it’s me, since this is, or was not my natural habitat.’ The congregation howled in laughter and I chucked, encouraged to go on.

‘My natural habitat would be somewhere in a ridiculously expensive club in upscale Lagos, even as early as a Sunday morning like this, but because of that wonderful day the choir just sang about, I’m here today.’

The congregation whooped and clapped and I had to wait for the excitement to die down, then I continued.

‘I’ve had issues that crippled my soul for as long as I can remember. And I’ve been enslaved to my pain for just as long, but one day-‘ I chuckled as I found Doc’s eyes in the congregation and he nodded at me with a smile.

‘One day, I met a good doctor, who did the unlikeliest thing I’d ever seen a smart Lagosian do. Or even a dumb one for that matter.’ The congregation laughed again and Doc smiled with a shake of his head.

‘Doc, no offence, but I honestly still can’t wrap my mind around what you did that night. It still seems surreal and I wouldn’t believe it if I weren’t the beneficiary.’ By now, the whole church, or at least, the ones around him could identify who I was talking about.

‘This man, was driving by one night in this same crazy city of Lagos, when he saw an unreasonable drunk- but then aren’t all drunks unreasonable- insisting to the club bouncer, that he was going to drive himself home!’ The congregation ‘aahhed’ and I chuckled.

‘The good doctor stopped by and told the bouncer he was going to drop the man home, and somehow, he talked the drunk into getting a ride with him. He dropped that drunk home after what must have been a long shift at work, before leaving for his own house.’ The congregants were murmuring to themselves now and I smiled.

‘You’re surprised? Well, your reactions mirror mine when other people told me about how I got home the night before.’ Doc’s head had dropped now, as though he was avoiding the stares.

‘Anyway, to cut the long story short. I ended up in the hospital for some reason a couple of days later, only to receive a doctor-visitor, who of course wasn’t my attending doctor. He’d revealed his identity as my volunteer chauffeur from that fateful night. But that night, I didn’t just meet the man who saved me from driving home in a drunken state-because something told me, my will just might have overpowered the bouncer’s that night,- but I also met the man who told me about Jesus!’ The church cheered and shouts of ‘Hallelujah’ rent the air.

‘But of course, I had way too many issues and rather than accept Him at the first offer, I didn’t, but thank God for not giving up on me! Sometime last week, on what should have remained in history as one of the messiest afternoons of my life, I found my way to the cross, and I laid my all there. I exchanged right there and then everything that was wrong and dysfunctional in my life for the joy that now lives in me. A joy I’ve never experienced at any other time in my life. A joy I’m bent on keeping, even if it’s the last thing I do on earth.’

Cheers and shouts of ‘glory!’ and ‘hallelujah’ rent the air again as the congregation clapped excitedly.

Calm flooded my soul despite the loud cheers and I raised my head and smiled at Doc who was similarly smiling even as I handed over the microphone to the usher and the choir sprung up again to sing my new favorite.

As I made my way back to my seat, my composure the direct opposite of what it was when I was walking to the podium earlier, joyful tears burnt behind my eyes and I watched as Doc stood up and pulled me into a big bear hug- not exactly like a friend would, more like a dad or… an older brother would. And I couldn’t at that point remember in all the twenty-five years of my life the last time a hug felt so… good!

I actually sobbed as I bent over and buried my head somewhere on his shoulder and his hands patted my back.

We separated just as the choir finished their rendition and we both took our seats. I had just told an abridged version of the story of my life, laying it all out before a congregation of hundreds. I wondered what Otunba would say to that? He was after all one to hold up a fake peaceful front to the world even when the actual situation was one of an inferno on the mountain. However, rather than gloat at the fact that I’d just rubbished one of his philosophies, I just felt terrible. I felt sorry for the young me growing up under a parent like Otunba. I also felt sorry for Rowan who had to run and stay away from her own family for whatever reasons. This was weird. Self-pity rather than anger and sheer loathness? Was my heart really moving on from all those negativities? I had mixed feelings but I didn’t get much time to ponder on them, because the service was dismissed and we had to leave.

After the service was dismissed, I had a brief one-on-one with the pastor where he prayed with me and encouraged me to keep fellowshipping with God’s people. He didn’t have to encourage me. I didn’t think I was ever going to miss another Sunday with God’s people. As I walked out of the auditorium with Doc who had waited for me while I met with the pastor, I was approached by no less than ten congregants, who wanted to tell me how touched they were by my testimony and how hard they prayed I remain strong in the faith. I was truly touched by the love that lived among these worshippers. I felt like I now belonged to a family. The Family of God’s people.

READ ALSO: THE BEAM IN YOUR EYES – A SHORT STORY

When we got out, Doc made a few introductions and one couple that appeared to be closer to Doc than any other person stood out. Doc introduced them as Stan and Deborah Okojie, his best buddies and co-intercessors.
After the introductions, he said to the wife, Debby, you remember double-double?’ Her eyes widened in surprise as she looked at me and smiled wide!

‘Wow!’ She exclaimed and added, ‘Praise the Lord!’

‘Hallelujah ooo!’ Her husband answered and asked, ‘don’t leave us in the dark, which one is double-double?’ She smiled and went on to explain the mystery behind double-double. That is, the fact that my salvation came on the same day with the news of a little baby whose diagnosis had come out way milder than they’d suspected.

As she spoke, I felt a needling sensation that someone was staring at me. It didn’t seat well with me but I wasn’t one for superstitions, so I discarded the thought and let my thoughts return to the new life I now had. One where I had a budding relationship with my Creator and Saviour and with like-minded people who cared deeply about my welfare, spiritual and otherwise.

And I knew for sure at that moment, that this was the life I wanted for myself. So, I made a silent request to God as Doc and I bade the Okojie’s goodbye and drove off, that He shouldn’t let me ever give up my redemption for anything in the world.

************************
Wow! Oh my word! Wait! Let me grab a handkerchief. That was one testimony of a kind! My, my! Oh what a wonderful day! So, we round up REDEEMED tomorrow! Yay! Thanks for coming along on this ride. What has been your experience so far? What have you gained? Share your thoughts with me in the comment box.

Thanks for your precious time here on the blog. I hope you have downloaded your free copy of my new eBook- Dare to Hope. If not subscribe below in the subscription prompt to get yours. God bless you abundantly.