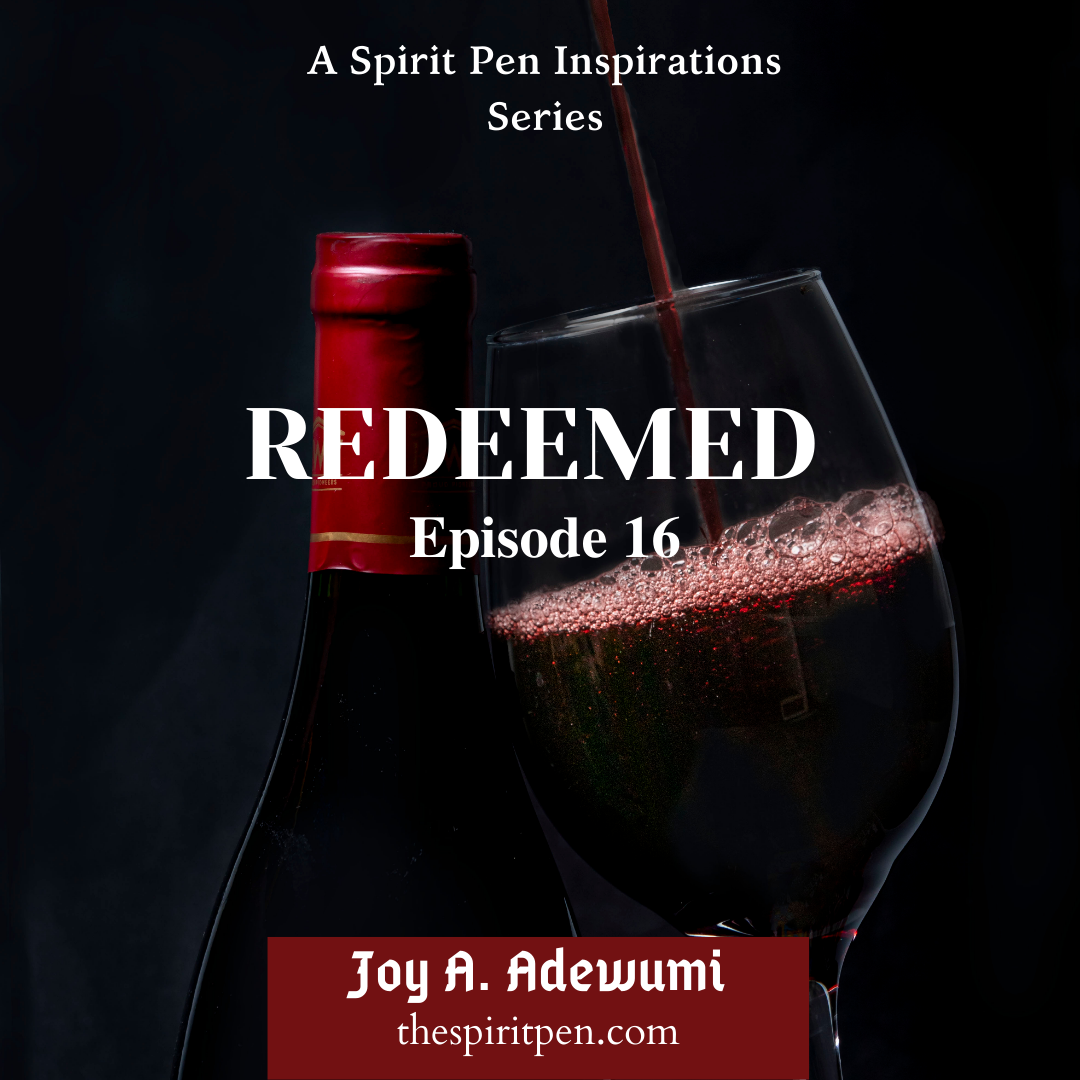 ‘Tomiwa! Look at you, all fierce and tight with anger. I guess I was worried for nothing,’ Otunba drawled as I charged into my living room, one end of his lips tipped up in a small smile. He was ensconced in one of the sofas in the room and was nursing a glass of something obviously alcoholic. My fists trembled in anger and I tightened them to retain control.

‘I see you have made yourself rather comfortable, but I’m sorry I have to break up your party. Otunba, kindly leave my house now.’

‘Your house, son, but my property.’ He replied flippantly and I was close to losing it. I hated how calm and collected he looked when I was barely keeping it together. It was usually the reverse, dammit!

‘It ceased to be your property the day I bought it. With my hard earned money, if I may add. Now, leave please!’ He downed a cup of his drink and relished it just to spite me, but I congratulated myself for not losing it right at that point.

‘That’s certainly no way to treat a caring dad who came to check on his recuperating son. C’mon, join me.’ He invited and my jaw dropped literally.

READ ALSO: EVEN IN MURKY WATERS – A SHORT STORY

‘Dad,’ I called, whilst scoffing, ‘do you even know what my diagnosis was?’ His hand stopped mid-air as he was about to down another glass, and then he placed the glass back on the table as he glanced up, apparently recollecting what he must have heard was the cause of my hospitalization.

His gaze however did not stop on me, but went beyond and his expression shutdown as he commanded gravelly, gripping the glass in his hand, ‘Tomiwa, sit down.’

I glanced back to check what he saw and saw BJ and Hamid watching unabashedly at the entrance. Ha! Same old Otunba with his motto- You can do anything indoors, but never lose face in public. The name “Kalejaiye” is a brand. I chuckled.

‘Dad, you don’t have to be bashful. There isn’t a thing you’re trying to hide that these two haven’t found out already. BJ is the guy whom you had Kaka abduct the other day remember? And trust me, they both know I disrespect you each chance I get.’ A strange euphoria filled me as I saw a muscle tick dangerously in his jaw, and with the way he was gripping that glass, it was bound to shatter anytime soon. Buy Before We Got Married by Ife Grace

Just then, I heard BJ whisper to Hamid that they excuse us. After they left, Otunba downed the drink and said as he looked up at me.

‘Tomiwa, cut me some slack, okay? The last time a member of my family was rushed to the hospital, she didn’t make it back alive and-‘

‘Oh!’ I cut in, ‘accept my condolences sir. I had no idea that fact just hit you now. Is this some kind of delayed reaction?’ I mocked.

Otunba simply sighed and continued as though I hadn’t said a word,’-and I got back home, only to find that my daughter was missing.’

At that statement, I simply lost it and kicked the stool closest to my feet as I bellowed,’ Don’t even dare, Otunba! Don’t dare do that pity thing. Pitiable doesn’t become you at all. Did you flipping say missing!?Are you trying to wiggle out of this one or do you think I haven’t figured it out? I mean, whose flipping fault is it that she’s been away for so long?! ‘What could be so important that could make you exile your own daughter?’

Otunba’s head jerked up as he asked, ‘What do you mean by exile?’

If I were in charge of the Oscars, I would give one to him without thinking twice; he had to be the best actor there was to look so shocked. Or maybe he was just shocked that I knew.

‘Are you kidding me? You seriously think I wouldn’t figure out at least that little? You exiled her Otunba! You did! So, stop playing the dumb card!’ I growled.

Otunba sighed as he ran both palms down his face. ‘Little wonder you’ve been so mad at me for so long. Whatever gave you that idea, Tomiwa? I have absolutely nothing to do with Temisan’s disappearance! In fact, I’m not sure where she is at the moment.’

My head spun and I knew it had nothing to do with the fact that I was recuperating. This was all on the news!

‘You’re kidding me, right? You really expect me to believe that bullshit?!’

‘Tomiwa, I know you’d rather believe that I sent your sister away, but I really didn’t. I know you’ve been trying to find her. Honestly, since I realised she didn’t want to be found and she has been doing a good job of hiding and throwing my PI off her scent, I’ve been hoping your PI would do a better job instead. But I guess you’ve not had much luck either. It’s funny however how she managed to concentrate and get a Ph.D whilst being so busy cleaning up her trail.’

I swallowed and narrowed my eyes at him, ‘How do you know she has a Ph.D? You also mentioned it at that meeting.’

‘Like I said, sometimes we get in luck and then before we know anything else, she throws us off scent and we’re back to nothing. It’s like she just disappears or makes us believe she disappeared.’ I knew my father! I knew him like the back of my palm and it gave me a migraine to acknowledge that he was actually being sincere on the issue. I really didn’t want to believe his words. It would, after all, like he said, be easier for me to believe he’d exiled her instead. However, I knew he was telling the truth and I felt like the earth below me just gave way as I collapsed on the tiled floor.

He scoffed with a shake of his head and replied, ‘She was just fourteen, what could she possibly have known that you don’t know now? If I’m to exile a family member for knowing too much, I believe that would be you, not her. But here you are? How do you explain that?’

I growled in frustration and punched the arm of the settee on which I was sitting.I hated that he had a good point, but I knew if Rowan’s disappearance coincided with mum’s death, then Otunba certainly had something to do with it!

‘Otunba, I know you have a hand in her decision to run away, and even if it kills me, I’ll find out what you did! Read my lips!’

‘Be careful, Otunba said as he stood up, tucking his hands in his pocket, ‘you’re still recuperating.’

‘Spare me that shit! What do you care?!’

‘I should leave now.’ He replied as he walked towards the door.

What the heck?! He dropped the bomb of the century and now he was leaving, just like that?

‘I hate you, Otunba! I hate your goddamn existence!’

He released a shaky breath, and my head snapped sideways! What just happened? Otunba? A shaky breath? But I didn’t have too much time to process that as he rocked on his heels with his back to me, then turned back and said with a dry chuckle, ‘Tomiwa, that’s stale news.’

‘Arrrggghhh!’ I growled in tears as I heard the door shut behind him. My heart pounded with exertion and I felt a strange desire to plant my fist on the glass centre table.

A drink! I needed something strong, very fast! Tomiwa, whatever you do, do not drink!

How on earth did those words even rise into my subconscious in the middle of this mess! And how on earth was I supposed to deal with this rage or confusion if I couldn’t down something strong!

‘Heck!’ I bellowed as I shot up from the settee and kicked the chair with fierce vehemence, wanting to exert myself to exhaustion. But the harder I kicked, the angrier I got and the more I craved something hot and strong.

Damn the good doctor! I was getting that drink!

I walked to the bar and grabbed two of my favorite strongest. Okay, no pills. That should keep me out of the red.

As I mixed, Doc’s words floated around my head again,

The devil is desperate, if you give into to the urge, it just might be your last bottle!

Well, if the devil wanted to finish me off. There certainly was no better time than now. My life was after all very messed up and useless! Doc wouldn’t have the slightest idea about that even if he tried!

Then I downed the first glass…

Wa to the wu! What on earth just happened here?! What do you think about Otunba’s reveal? I mean, he was supposed to be the bad guy who hid Rowan away, but now…

Well, I honestly can’t wait to see what you think in the comment box. Your followership means a lot to this me and this series.

Thanks for your precious time here on the blog. I hope you have downloaded your free copy of my new eBook- Dare to Hope. If not subscribe below in the subscription prompt to get yours. God bless you abundantly. See you tomorrow!

Yours truly,
The Girl with the Winning Smile,
Spirit Pen!L