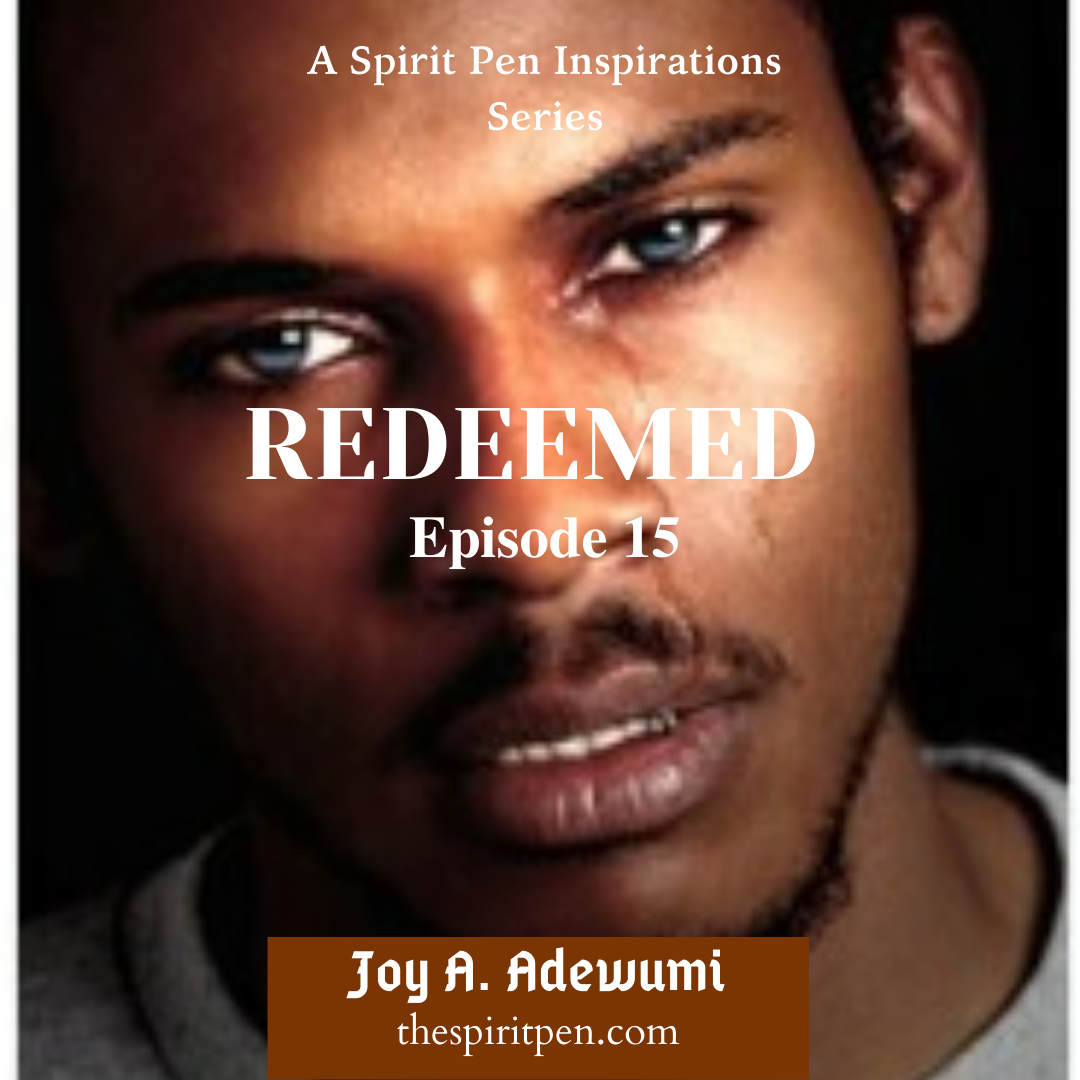 My mind whirled tumultuously during the ride back home and I kept zoning out of the small talk BJ was trying to make. At some point, when he realised my mind was occupied, as it always was anyway, he turned up the car radio and occupied himself with driving and listening to music while I was left to my thoughts.

I couldn’t remember the last time I’d felt so burdened with a decision. Usually, I was sure of what I wanted from the onset- though depending on who was involved, I could either get my way or not. But, whatever I ended up doing and for whatever reason, I was never at a loss whenever I had to make a decision. So, for the first time in my life, I felt the internal struggle I’d only heard people talk about. And it was the struggle of the century, as far as I was concerned.

For so long, I’d lived in fear of becoming Otunba. Here, however was the first plausible solution ever, dropped right in my lap and I couldn’t believe I was about to let it go because of the same Otunba!

What a beautiful life!

This is not because of Otunba, this is because of your hate for Otunba. Thus, this one is on you, Roland.

READ ALSO: THE BEAM IN YOUR EYES (A Short Story)

I blinked rapidly at the sudden reply and looked around as though there was someone else in the car apart from BJ and me.

‘Did you forget something?’ BJ asked as he glanced at me.

‘Did you say something?’ I asked in return.

‘I said, did you forget some-‘ BJ repeated enunciating his words more clearly and loudly, but I cut him off.

He blinked twice and replied,’ Nothing. Was just singing along.’

‘Did I say something?’I asked again and BJ scoffed staring at me for way longer than was safe for a driver to look away from the road and asked as he narrowed his eyes.

‘Dude, you sure say you okay so? Did the doctors say anything about maybe a hit to the head, or-’

‘O…kay.’ He said shrugging as he returned to his music.

Then I said after a sigh, ‘BJ, the doctors said what happened was a really close call and if you hadn’t been around, I could have died.’ My breath hitched and BJ glanced at me worriedly.

‘So, I just really want to thank you for coming. I still can’t wrap my mind around the reason you’d leave your day job to come check on me, but I’m glad, really glad you did.’

‘You didn’t know?’ BJ asked, and I turned a confused look at him.

‘You didn’t know that I called you like a billion times that night?’

‘No, though I now recollect a few details from that night, especially the part where I mixed the drinks and threw stuff, but I don’t exactly recollect your calls.’

‘You weren’t picking any of them, well, except the one where you told me we’d talk later which only left me more worried rather than relieved and guessing the effect the meeting must have had on you, I barely slept that night. I just had a niggling feeling that you’d do something damaging. It was the reason I couldn’t help but rush in to check on you.’

I swallowed at the thoughtfulness and at the fact that he really cared, ‘Thanks man. I feel like I owe you my life.’

‘Come on, don’t be so dramatic. You know, I still shiver at the thought of what your dad’s goons could have done to me if you had resisted his proposition. For a while in that holding room, I wondered if I’d lose a few fingers first before you finally give in.’

Both of us chuckled at that and I shook my head, ‘Baba, you watch too many crime thrillers.’

‘But still man, I feel like I’m the reason you ended up in that meeting.’ He said glancing at me.

‘Oh, never mind. If it weren’t you, it would have been someone or something else. Somehow, Otunba never loses.’ I shrugged.

‘Uhn.’ BJ hummed, but my mind was busy reeling at my last statement.

‘Guy, I heard you the first time.’

I glanced at him and it took the whole lot of three seconds for me to understand what he said, ‘Oh! I- sorry, my mind was somewhere else.’ I released a shaky breath as those words danced over and over in my head. It was true that Otunba had never lost a tussle since our cold war began, but it was equally true that I let him win almost every time, especially in recent times.

Otunba never lost a tussle because somehow, I always lost on both ends, even when I should have won at least one! This was because each time I felt like I’d made a decision Otunba didn’t have the goodness in him to make, rather than feel like I’d won, I always thought I’d lost, hence, truly losing, because each time, I ended up drowning myself in liquid sorrow and metamorphose into a miniature Otunba under the influence.

Then Doc’s words came to me again.

Number one, what would Otunba do in this situation? Would he pick freedom and release over hate or would he do otherwise? Number two, would I really rather choose to keep hating over getting a chance to be free from the looming demons that were fast closing in on me? For Pete’s sake, I almost manhandled my help’s teenage daughter just a few days ago under the influence!

Then immediately, I jolted forward on my seat and was about to ask BJ to drive back to the hospital, but that would have been just plain unreasonable and unfair. The poor guy had gone over and beyond to be really good to me and there was no way I was taking advantage and using him as my personal chauffeur now. Besides, the chances that Doc would be free were slim to none. Especially not with the way he’d raced out of the restaurant earlier.

‘Dude, you’re acting weird. Are you okay?’ BJ asked, worry evident in his tone. I could imagine why he would ask. I was acting on my very busy thoughts and I was bound to look weird.

So, with a small smile, I replied, ‘Yea, I’m good, was just thinking of something. Thanks man!’ He nodded and kept driving while I returned to my thoughts.

Then I remembered the sticky note in my pocket. I was definitely going to call him. It would be the first thing the moment I got home. I was glad I didn’t dispose of the note after all.

‘Guy, thanks a lot for your help. I’m grateful,’ I said as I shook hands with BJ once he drove into my compound, and we both stepped out.

Hamid came running towards me and I wondered what the excitement was. I had been away for just two days not two years, but before he got to me, my eyes caught sight of the car at the other end of the parking space.

‘Hamid, what or better still, who’s that?’

Hamid got to me and answered with short and shallow breaths, ‘Oga, he breathed still panting, ‘na your papa o.’

‘Na Otunba. Him dey inside.’ Anger flushed through me and I almost doubled over with the hotness that flooded my stomach. My hands fisted instinctively as I made to charge into the house, but BJ held me back.

‘Skinny, you’ve got to calm down. What exactly would you do if you barged in now?’

‘Are you asking me?’ I asked scoffing, ‘Of course, I’m going in to tell him to get off my flipping property!’

‘Man, I have never felt better in my life!’ I said as my breaths got shorter with the effort of restraining from punching something.

‘Guy! That man won’t leave just because you ask him to.’ He tried to reason with me.

I scoffed at his words and replied, Trust me, I won’t be asking. Just watch me!’ And with that I jerked out of his grip and dashed into the house.

Wow! One moment this guy is set to make the big decision and another his who being is on fire with rage! Roland sure is one prayer point! What’s going to go down inside that house? We all know BJ was right, Otunba won’t leave just because Skinny asks him to! Let me see your predictions in the comment box. Your followership means a lot to this series.