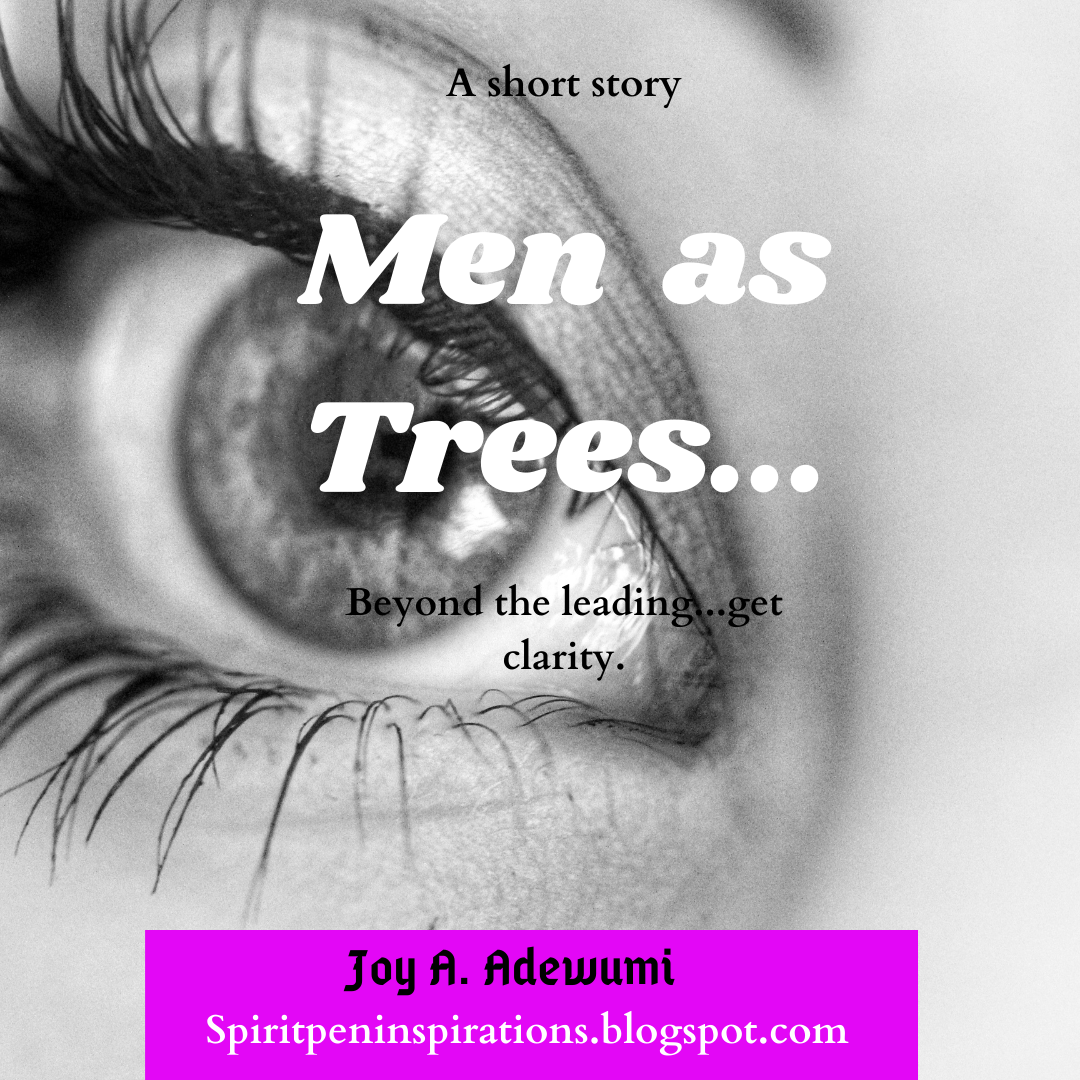 Men as Trees… – A Short Story

Damaris jolted to her feet as the lady who’d entered the pastor’s office some minutes ago came out and shut the door behind her.

Finally! After waiting for about an hour and half, it was finally her turn to see the pastor! Were Counselling Tuesdays always like this?

As she walked into the office, she was presented with the familiar smiling sight of her pastor.

‘Hey! Look at who we have here.’ He laughed in his signature robust manner and despite herself and the reasons that had brought her there, she smiled.

‘I know, but really are Counselling Tuesdays always like this?’

‘Right now, I don’t know how many there are in the waiting room, but it wouldn’t matter even if I asked, because just when I think I’m almost done, a couple more arrive. But this is the ministry to which I’ve been called and I’m more than happy to spend and be spent for the Master.’

READ ALSO: Even in Murky Waters

Damaris nodded her head and smiled,

‘I think it’s a good thing I came around then. Somehow, I was beginning to get frustrated at how hard it’s been to get through to you. The Holy Spirit however ministered to me to come here. It felt weird at first but now that I’m here, I totally understand. Wow!’

Her pastor smiled as he leaned forward and said,

‘Things are very different from a year ago when you were last in the country. The church grew, you know?’

‘I see that,’ Damaris hummed.

‘So, what brings you here?’

‘Dad, I’m confused.’ Her pastor, who just also happened to be her Dad smiled and replied.

‘You know you look really scary whenever you get all soft, and start a statement with Dad?’ Damaris laughed again despite the heaviness that had brought her to his office and had forced her to wait in line, for a counselling session with him.

‘Trust me, if the situation weren’t scary, I wouldn’t have had to come over to your office and wait in line just to see you.’ He hummed his understanding as he rested his arms on his big office table and intertwined his fingers.

‘So, what the problem? We spoke just two days ago and you said the conference you’re here to plan and host was coming along just fine? Is there anything else you did not tell me?’

Damaris nodded her head. True enough, she’d returned to the country primarily for a conference she was to plan and host, but her short intended visit was for a whole lot than that. That was just the physical aspect of her visit and it was looking promising. The spiritual aspect was what had her confused.

‘Damaris?’ He called, gently pulling her out of thougtsville. She sighed and said,

‘While I was preparing to come over, God ministered to me that there is a project He wanted me to contribute to. He said He had need of my service on that project. Something about a youth outreach. I figured it had something to do with talking to them and stuff. Do you know how excited I was?’

‘I can imagine, you were always and still are the outreach enthusiast. So, what’s the problem?’

‘Great question! The problem is that since I set foot on Nigerian soil a month ago, I haven’t heard a peep with regard to that project. I feel like the instruction was all in my head. The conference would take place in a fortnight and a week after that, I have to go back to Manitoba. I have searched and asked all around for any outreach of that nature, but nothing! I don’t know…what do you think I should do?’

‘So, you searched everywhere and could find nothing of the nature of what God mentioned?’ He asked as he touched his thumbs to each other rhythmically.

‘Yes.’ Damaris replied with her gaze fixed on him.

‘First of all, I talked to God and then I’ve been asking around from all the youth ministers I’m acquainted with, starting from the youth department here in our church?’

‘Now, I’m more concerned about the reply you got from God, than the one you got from the youth ministers. What did God say?’

‘Honestly, I didn’t really ask Him. More like told Him that I was here now and ready.’ Her dad smiled like he’d solved a puzzle and said,

‘You know Dam, when God ministers a leading to you, no matter how much you think you have it figured out, you need to remain in the place of prayer for clarity. If not, you’ll rush out, only to discover that you’re only seeing men, as trees walking, rather than men, as men walking.’ Damaris wore a perplexed look on her face and her dad smiled.

‘Okay, let me simplify this. I pray the Holy Spirit ministers His and not my lame words to you.’

‘Amen.’ She murmured as he continued speaking.

‘You remember that blind man in the Bible whom Christ healed?’

‘There were a number of them.’ Damaris chuckled.

‘Okay, right. The one whom Christ touched twice before he began to see clearly. You remember now?’

‘Good! Now, at the first touch, he received his sight, but only partially since he said that he could see men as-‘

‘Great!’ He smiled and gave her a thumbs-up. ‘Then I’m sure you also remember that it took a second touch for him to see very clearly.’

‘Well, it is the same in many situations of leading and instructions from God. Some people mess up the assignment because they rushed out whilst still seeing men as trees, thinking that’s as clear as they need to see. Are you getting me?’ He asked and she nodded firmly again.

‘When God says go, don’t rush out and start walking aimlessly, you’ll get frustrated on that journey. You have to stay a bit longer on your knees and ask, where?’

‘Clarity answers many questions that several people don’t realise they should ask till they face a dead end and think God has misled or forsaken them. God will never mislead any man, but several men tend to “misfollow”.’

‘So, you need to return to your knees and ask for clarity. What project is this Lord? Where would I find it? What am I supposed to contribute? How am I supposed to go about it? Those should be the main questions. You can’t succeed in the ministry based on assumptions and presumptions.’ Damaris leaned back with a sigh of understanding, but kept her gaze on him as he continued.

‘Just because you’re a public speaker does not mean your contribution to that project has to be your voice. This could even be the reason God has not linked you with that project, because you just might jump at it without asking anything further. I know your enthusiasm Dam, you’re my daughter.’ Damaris chuckled at that, nodding her head slightly.

He was right. She had assumed and presumed and might have made a mess of things had God not kept her waiting till she had to turn to her dad for counsel. And she was grateful she obeyed. ‘Thank you sir, I feel so relieved now that I know what to do. And I’m glad I came to you just the way the Spirit of God instructed me to.’

He smiled and said,

‘You know, my secretary did tell me you were around even though you asked her not to. She said you were bent on waiting in line and I asked her to let you be. It warmed my heart that you were so understanding. I know you’re busy, but you didn’t mind the wait. I’m glad.’

‘Oh! I did mind the wait, but the Spirit of God would not let me jump the line, so I had to stay put. After all, it’s the same Spirit of God I was banking on to minister answers to me through you. There was no sense in disobeying Him, not that there ever is. Thanks again sir. And God bless the work you’re doing here.’

‘Amen. You be good and be safe in that hotel you’re lodging. I understand it’s closer and all to your office base, but your mum hates the fact that you’re home for the first time in about a year and you are staying somewhere other than home.’

‘I trust you to help me calm her down. Besides, I’ll be home a full week after the conference. So…’

‘So, we should be calming down. I understand.’ They both laughed at that, after which they prayed together and she took her leave.

With a lighter heart, she got into the car the conference organisers had given her to commute around while she was in the country. As she started the auto, she began praying in her spirit, prepping the atmosphere for the session she would be having with God once she got back to her hotel suite.

It’s a joy to connect with you on the sheets of the Spirit again.

I hope the message was as clear as day. Just like an idea might not become a success without adequate strategic planning; so also beyond the initial leading, there’s a need for clarity on any instruction you receive from Heaven.

May the Holy Spirit keep us grounded and patient to receive the best of the secret place experience, at every point in time in Jesus name. Amen.