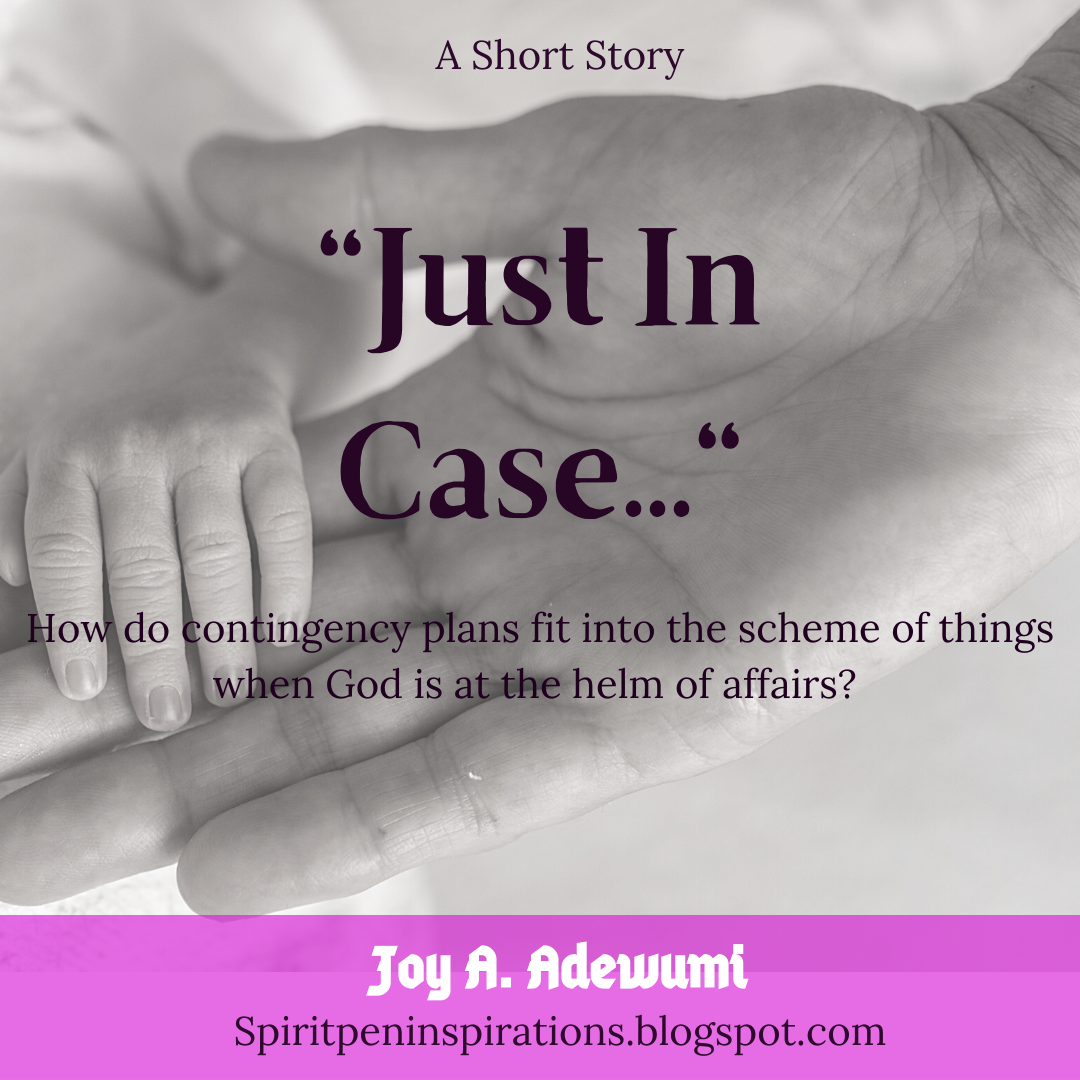 “Just in Case…”- A Short Story

‘Wait! I thought you said God told you specifically to apply to P&G. So, why are you-‘

‘Ooohhh!’ Tayo groaned as he cut into his mum’s words.

‘I know what I said God said, and I believe His word and will definitely obey. But, this is just a plan B just in case-‘

‘Just hold it there before you say something profane about Divinity!’ His mum cut in with a swift raise of her palm that stayed right in front of his face.

‘Ah ah Mummy, kilagbe kilaju? (what’s the big deal)?  It’s not that serious now!’ He exclaimed astonished, stretching his hands out. His mum gave him the stink eye before replying,

‘Se emi l’on d’apara fun? (Am I the one you’re talking to that way?) Why did you ask God for direction if you didn’t trust Him to open that path up for you?’ She asked as she folded her arms across her midriff.

Tayo swallowed and scratched his head as he replied,

‘It’s not that I don’t trust Him. Of course I do and that is why I will be applying there first and foremost, but I don’t think applying to other places is a bad idea.’

Tayo released a deep sigh and avoided his mum’s eyes.

‘Just in case, you know, things don’t go according to plan.’ He replied as his voice trailed off.

His mum shook her head as she asked,

‘Whose plan? Divinity’s or humanity’s?’

‘Mum, you know when you put it that way, you make me sound-‘

‘I had no idea there was anyway else to put it!’ His mum cut in! Tayo groaned again.

‘Are you sure you heard God? Are you really sure He spoke to you? Or is Procter and Gamble just your own move of faith?’

Tayo just stared at the kitchen cabinet above his mum’s head as she spoke on. He always felt chastised whenever she got all preachy like this.

He wasn’t doubting God’s word. He was just making contingency plans. That wasn’t faithlessness, was it? It was just wisdom! So, why did she have to make it look like He was a reincarnation of the faithless Israelites. Maybe he shouldn’t have shared God’s promise and instructions to him with her in the first place.

‘Tayo, are you listening to me at all?’

Barely holding back the urge to roll his eyes, he grumbled,

‘Yes, mum. Where else could my mind possibly be?’

‘I don’t know. Maybe on the contingency plans you’re making in case God fails you.’

‘Jeez! Mum! Wow! Nobody said that!’ Tayo exclaimed his eyes widening like saucers.

More than his surprise at her bluntness, he was so shocked her words had mirrored his thoughts like she could hear them.

‘Nobody said it but somebody implied it. How else do you explain the phrase- “Just in case”? That phrase is used to create a failsafe in case the original plan doesn’t work, no?’

‘See son, plan B, C, D even till omega is advisable when it’s your plan. But when it’s God’s plan, except He told you expressly to do that, contingency plans are an insult to the infallibility of God’s word and His omnipotence. It’s like saying, just in case God doesn’t come through or doesn’t come through early enough for me, I could just fall back on this. Only few situations can express faithlessness and doubt better than that.’

‘But mum, what if P&G doesn’t work?’ Tayo groaned.

‘P&G “might” not work only if it was originally your idea. P&G would certainly work if it’s God’s word. Because, if you serve the same God I raised you up to serve and I serve, then, you’d know and trust that God is not a man that He should lie, neither is He a son of man that He should repent.

‘Besides, you just described the expectations of a man, not that of God. And don’t get me wrong son, once again, making failsafes is a very wise step when it’s a man-made plan. I’m just asking you to assess your reasons.’ Then she leaned closer emphasizing each of her next words.

‘Why do you think it’s necessary to apply to other places when you prayed and you claimed you heard specifically that you should apply to a certain company, despite the fact that they are not calling for applications?’

Tayo blinked rapidly at his mum’s straightforwardness and rubbed his chest as though to ease an ache there. Her bluntness hit him.

His mum was asking for a hard thing, but was it his mum? If he was being honest, she didn’t seem to be doing the asking, she was only relating what God was asking of him. Could he do it? Could he be that trusting? Was this even a matter of trust?

‘Asking God for His will in the first place is an attestation of your trust in His omniscience and His plans for you, doubting Him after that and making failsafes against His instruction is sheer blasphemy. I have no two ways of saying it.’

‘Oh my!’ Tayo breathed as he stared at his mum. He never anticipated the discussion taking this turn. He never even guessed his thoughts could have such farfetched implications.

‘If this were as issue of marriage, then having a Plan B would seem like an aberration, so why is it any different in other areas of your life. Don’t you know where you work for even the shortest period of time could have a profound effect, whether positive or negative on your career and life as a whole? What if God is trying to protect you from some unprecedented evil.’

‘Mum-‘ He was saying when his mum held her right index finger up and said,

‘And before you go on to make your decision, or counter me further, let me remind you that every single person who made failsafes against God’s express instructions in the Bible ended up making the mistakes of their lives.’

She turned back to turn off the gas stove behind her and opened the steaming pot of stew about an inch, before turning back to Tayo and continued.

‘Ishmael was a contingency plan Sarah led Abraham to make as against waiting patiently for the fulfilment of the promise and that one decision changed the story of humanity.’ She had her right hand raised up and was ticking off on it. Tayo wondered just how many examples she had already off the bat.

‘Making the sacrifice offering himself prematurely, as against waiting for Prophet Samuel was a contingency plan Saul made, and it was the beginning of his strings of faults in the sight of God.’ Tayo’s mum said as she dropped the next finger.

‘Son,’ his mum said finally as she rubbed a dainty smooth palm across his arm,

‘This issue, if you look at it closely, is more a matter of trust than it is of wisdom. Start by assessing your reasons. What God says, He will do, but He that comes to God must believe that He is and that He is a rewarder of them that seek in faith.

‘Remember that verse in James- let not that man whose heart wavers think he can receive anything from God. It’s either you believe that what God has promised, He will do, or you don’t. And contingency plans are an attestation to the latter.’ With that she walked out of the kitchen leaving Tayo to his thoughts.

With a shake of his head and yet another deep sigh, maybe the tenth within the course of that conversation, he looked up towards the heavens and said,

‘God, I’m sorry I doubted you. You’ve always come through for me and it’s sheer ungratefulness for me to think that this time would be any different.

‘I’m glad for the gift of a mother who knows your word and doesn’t sugarcoat it, whether the message you have for me through her is heavy or light. And I’m glad for your Holy Spirit that has convicted me of my foolishness and faithlessness.’ Scratching his head sheepishly, he continued,

‘God, I could make a billion failsafes and they would all fail if You don’t make a way through them, so at the end of the day, it’s foolish to think some other way would open when the actual way God already led me to is abandoned.

‘So, God, here I am saying I surrender to Your will and I trust you explicitly. P&G it is! And because you’ve not asked me to apply anywhere else, P&G only. And I trust that whatever comes of it, You have a reason for everything. Have your way Lord Jesus and take all the glory. Amen.’

Tayo’s heart felt so light and a strange joy filled him, expressing itself without inhibition as a big smile on his lips.

‘Amen,’ his mum echoed at the kitchen entrance and Tayo jerked.

‘Whoa, Mum! You weren’t eavesdropping, were you?’ His mum smiled and replied,

‘I was coming to get my phone and I saw you praying. Your words arrested my heart and I couldn’t help thanking God that I did something right in this one life of mine.’

‘Something right, what’s that? This discussion?’ Tayo asked wondering how that could translate to the one right thing she’d done in her life.

‘No, silly! Not this discussion. I meant raising you.’

‘Oh my word! Mum, could you possibly be cheesier than this?’ Tayo laughed and his mum chuckled.

‘Well, that’s what you’d say till you get into my shoes.’

Tayo moved close to her as he held her petite shoulders in his large hands and replied,

‘Mum, you’re super cheesy, but I love you like that.’

‘Okay… Look at pot calling kettle black,’ his mum replied with a shaky voice as her eyes shone with a sheen of unshed tears. Tayo laughed and enveloped her into a gentle embrace as he tucked her safely into the crook of his arms.

‘I love you too son,’ her muffled words came back to him as clear as daylight in his grateful heart.

Trust in the Lord with all your heart and lean not on your own understanding. In all your ways acknowledge Him and He will direct your paths.

What God says He will do. Making a plan B as a failsafe to God’s promise is an act of self-management and speaks of doubt.

Let’s learn to trust God wholeheartedly and walk in the path He has shown us. And whatever comes of where He’s leading us, whether it fit into our expectations or not, remember that all things work together for good to them that love God and to them that are called according to His purpose.

I pray the Lord will increase our faith and help our unbelief in Jesus name. Amen.

The grace of the Lord be with you.

Yours Truly,
The Girl with the Winning Smile,
Spirit Pen!

If you’ve been blessed by this blogpost, do well to drop a comment on your thoughts about the story below. And share this link with your contacts.