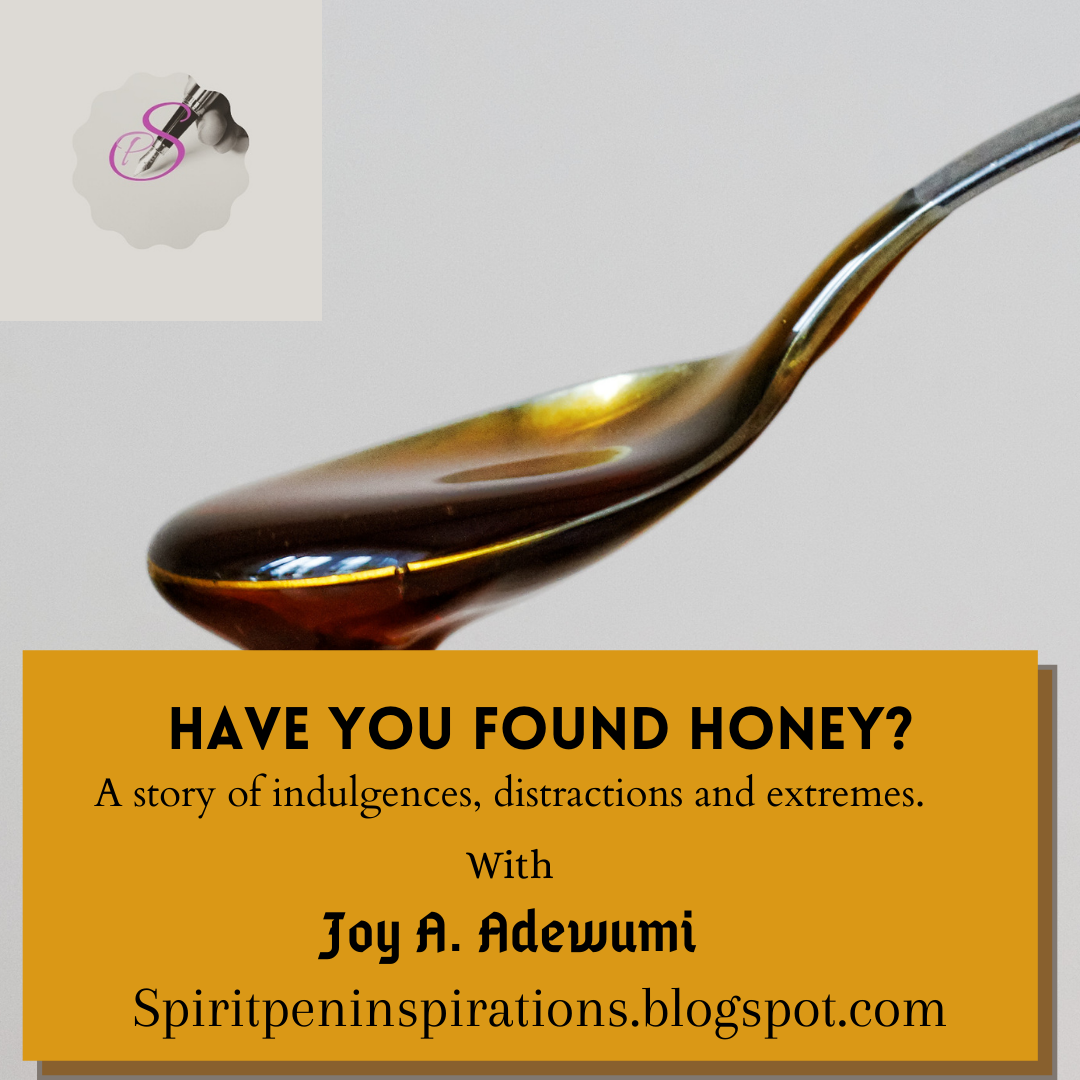 Have You Found Honey? – A Short Story

‘See Itohan, abeg don’t start with me this afternoon. I don’t have time for your palava, biko.’ Ruth hissed wagging her forefinger at Itohan while the latter simply shook her head like she would at a petulant child.

‘My dear, the devil has purposed to sift you like wheat but like the Saviour, I am praying for you. You can’t be a Christian and be watching all these Hollywood, Bollywood or Korean series. They are from the pit of hell! I’ve warned you times without number!’
Itohan repeated the same thing she had been singing for the past five minutes to a now exasperated Ruth.

Ruth turned to me, her eyes begging for help. I on the other hand was simply trying hard not to laugh at the old drama that was never stale unfolding before my eyes.

I had determined a long time ago not to get myself involved in petty arguments like this one between my roommates. So, whenever they started like that, I always plugged my ears even if I was listening to nothing, just to give them the illusion that I was not listening, but this time around, I was so amused at the turn the drama took that I forgot to plug my ears. There was no way I could fool anyone now.

Still, I was very reluctant to place myself smack right at the middle of their drama. I shook my head at Ruth as my lips dipped in a smile and and I dragged my right thumb and index finger across my lips indicating that it was zipped up.

Ruth’s face fell and she squeezed her mouth like she had tasted something bitter when Itohan started talking again.

‘Itohan, Itohan, biko just pause for a bit.’
I’d heard more than enough and since Ruth’s silent plea for help, I’d felt some kind of pull on my heart to clear the air as best as the Holy Spirit would give me wisdom to. I hoped it counted for something, because I knew Itohan to be a very hard fellow to convince on almost every matter, talk less of ‘matters of conviction’ like she called them.

Ruth glanced at me, paused her movie and smiled so wide that I hoped she wasn’t raising her hopes in vain.

‘Itohan…’ I turned to face her directly.
‘Do you mind backing these strong claims of yours with verses from the Holy Scriptures, or are they just convictions you got from some testimony of someone who claimed to have visited heaven and hell?’

She must have almost had a whiplash as her neck jerked sideways in my direction. I could tell she wasn’t expecting what I dropped. She opened her mouth and closed it several times and I sighted Ruth making concerted efforts to hold back a grin.

Finally, after what seemed like an eternity of opening and closing her mouth, Itohan finally sputtered.

‘Well… Well, the Bible said not only those that do bad things will end up in hell but those that take pleasure in them that do so.’

I closed my eyes, ran my palm down the length of face and pinched the bridge of my nose as I prayed for patience and wisdom on how to give an edifying answer to the matter on ground. ‘Fine, Itohan. You’re right, but have you ever seen any of those movies with Ruth? You know, just to verify your claims that they are actually up to something bad and she’s taking pleasure in watching them.’

‘I don’t need to watch them with her to know. If Jesus Christ is not the central theme of the movie then, it is not fit for any Christian to watch! Besides, they have a way of sucking you in and making you addicted. Why? Because they are from the pit of hell! That’s why!’

‘Okay, you are wrong on every count there. Just because Jesus is not the central theme of a movie does not make it immoral if it isn’t. A movie is immoral only if it has immoral content. Period. So get another excuse.

‘Also, we’ve also established the fact that you have no scriptural backing to prove these things are from the pit of hell, so, stop misleading people around you with such misinformation!’ I snapped infuriated by her assertion on the matter.

Ruth’s smile had slipped now and she was making vertical motions on her chest, signing to me to calm down. I smiled at her and turned to Itohan, who was staring at me eyes wide, wondering what had gotten into me. Her lips were also turned down disapprovingly.

This was why I hated getting into conversations like this one. My patience usually was very short with people who went around peddling doctrines based on their own personal perspective and forcing it on others like it was the gospel.

I prayed for an extra dose of patience as I closed my eyes briefly and said,

‘It’s okay o. Me, I’m a good Christian, I don’t-‘ She began to say but I interrupted her promptly.

‘Okay, Itohan, enough! We know!’ Patting myself on the back when my hackles didn’t rise.

‘The truth though is that there might be an iota of truth and wisdom in your advice to Ruth though it is misinformed.’ At this point, Ruth’s eyes grew as wide as saucers and she gestured with her palms opened out asking what on earth I was talking about.

I smiled a little, knowing she didn’t see that coming. Itohan too had a curious and surprised look on her face. Both girls looked so comical I couldn’t help the chuckle that escaped my lips.

‘Okay ladies. Here it is. It’s true that some of these secular movies are very harmful to our spiritual health. They have central themes and scenes that are just plain offensive to our Christian minds.

‘Watching their unedifying content saps us of so much grace and a continual and frequent consumption leads to dryness and coldness in our Spirit-man. They also have a way of occupying your every waking thought so much that even during meditation, you just keep seeing flashes of various scenes from the numerous movies you’ve consumed recently.

READ ALSO: The Beam in Your Eyes

‘This is the reason we must choose what we watch very carefully. There are bad ones, manageable ones and there are also good, amazing ones that aren’t even gospel-themed. For me I just stick to the good ones. No need wearing down my spiritual strength on something that’s supposed to be simply for relaxation.

‘Also, yes, I agree, series can be addictive!’
At this point, Itohan interjected with an
‘Ehn ehn’ and a clap of her hand. I couldn’t help rolling my eyes at her and Ruth was wearing a frown now. I didn’t care what either of them thought. I was just contributing my quota to the issue as the Spirit of God had taught me. They could either take it or leave it.

‘And this is not because they are from the pit of hell or anything of that nature, Itohan, but because any good, well-written and expertly acted series would be addictive.’

‘Ehn?’ Itohan asked, pushing her nose up in the air in what seemed to me like disgust. Ruth just gawked at me.

‘Yes, remember these series are viewed over a long period of time, episodes released week after week. The only reason any normal person would stick with the series till it ends is because it’s so interesting they can’t help coming back for more. It’s just the way it’s designed. It’s simply an attribute of a good series and the same goes for even Christian series.

‘But, this is where we have to apply our hearts to wisdom. Unlike the normal viewers who view by the week as the episodes are released, we wait till it is complete so we can binge-watch. And since these things are so addictive, we find ourselves watching as many as three or four episodes at a stretch, as much as our schedule can take.

‘At the end of the day, we discover we’ve spent at least three hours each day to binge watch a 16 or 24-episode drama. One hour per episode.

‘My dears, how many hours free time do we even have in the first place? Not only at the end of the day would we have spent time meant for profitable activities on movies, we would have also succeeded in loading our minds with more distractions than we can handle. Hence the need and call for discipline and wisdom in our pleasure-seeking.

‘That’s all I have to say, biko, I have an appointment.’ I said as I scooted up from my bed and dashed through the door wanting to escape whatever would ensue once both ladies recovered from their daze.

Wisdom is profitable to direct…

And even regarding something as sweet, nutritious and unharmful as honey, the Bible said in Proverbs 25:16 (KJV):

“Hast thou found honey? eat so much as is sufficient for thee, lest thou be filled therewith, and vomit it.”

It might not be harmful, but overindulgence is always a letter to harm. In other words, no dey overdo!

On the other hand however, we shouldn’t lend extraneous interpretations to God’s word. It’s unscriptural, discouraging and misleading.

The peace of God stay with you this week in Jesus name. Amen.

Yours Truly,
The Girl with the Winning Smile,
Spirit Pen!

If you’ve been blessed by this piece, please be kind and drop a comment for me below and let me know your thoughts.