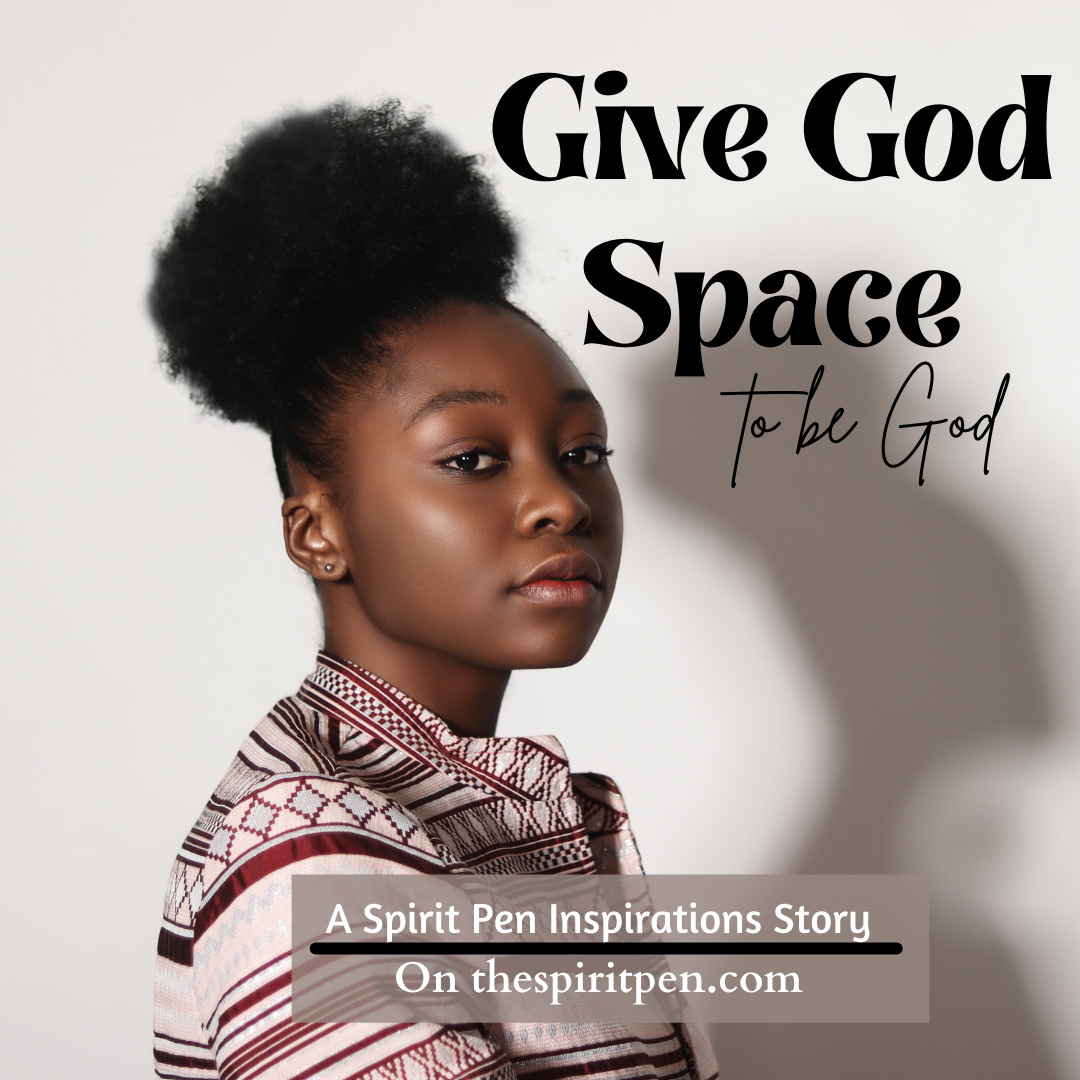 Give God Space to be God

A Short Story Written by Joy A. Adewumi

Tayo glanced up in near-irritation as his younger sister sighed for the hundredth time in what had to be just five minutes. ‘Want to talk about it?’

He’d noticed she’d been morose and moody since she returned from her visit with her friends. She’d spent the Eid-el-Fitri public holiday catching up with them and generally having fun, or that was what he thought she must have done, but these sighs said otherwise.

She glanced up at him and shook her head. ‘Just keep praying for me.’

Tayo’s eyebrows flew up in silent alarm. That was not good. He placed his phone on the centre console and faced her squarely. ‘Just how bad is this situation?’

She rolled her eyes and eyed him in what he knew was irritation but he couldn’t care less. At least, she was acting more like herself. ‘I never said it was bad.’ He sat back. ‘You didn’t have to. So, what exactly is the problem? What am I supposed to be praying about?’

She sighed again and Tayo could vouch he was close to throwing something at someone. Could she just stop sighing? It was doing him in.

‘Can you just stop sighing and talk already?’ He gritted behind clenched teeth.

She looked like she was about to sigh again but thankfully, she held it in.

‘You know that job interview at UAC Foods?’

Tayo didn’t have to think hard. The memory of her calling him the day she got invited for an interview was still fresh in his mind. She was beside herself with joy. ‘Yea, what about it? Didn’t they say they were going to get back to you?’

She shook her head as she looked down and fiddled with her fingers. ‘Well, you know how these things work.’

His eyebrows scrunched in confusion. How what works? What was she saying? ‘No, I don’t. I’m afraid you’ll have to explain.’ He watched her purse her lips and added, ‘Madam, don’t you go silent on me. What are you talking about? Did you get a rejection?’

She gave him what looked like a stink eye but it lacked the usual spirit. It was still some attitude though, so, he’d manage it. ‘I never said anything about a rejection but with the way things are going, I might have as well gotten one.’

Tayo cocked his head and narrowed his eyes at her as he stroked his beards. He knew what was going on in that beautiful brain lodged in his sister’s head. He was a job seeker once, too. ‘The interview was only a few days ago, Dolapo. Don’t stress it. Just pray and trust.’ She scoffed. ‘That’s easy for you to say. You’re not the one in the waiting room.’

He smiled despite her irritation. He knew this feeling all too well. ‘True, but I sure do know how it feels. But I must ask, does this have something to do with your visit to your friends?’ She pursed her lips again as that look of hesitation crossed over her features. He certainly had his answer. It did have something to do with the visit. Then he added just to get her talking again. ‘It was the twins you were visiting with, ba?’

She sighed and nodded. ‘Yes, and a cousin of theirs was also one of the interviewees. He got a job offer the day before the Eid break began.’ Another sigh.

Tayo smiled at her forlorn expression and went to sit beside her. ‘Hey, Pumpkin!’

‘Yah! Stop calling me that!’ She loved to use the Korean version of “Hey”. Said it had more spunk than the English word.

He wrapped one arm around her back and spoke in low tones. ‘I know you won’t believe me but I know how you feel right now. I was a job seeker too, once upon a time, remember? However, you can’t let someone else’s report kill your faith.’

READ ALSO: He’s Got Your Back Always… (A Short Story)

‘How do you mean? It’s over. They’ve made their selection. Now, I have to go back to waddling in the pool of job openings and wondering when something fitting will come along again.’

‘Just because your friends said their cousin got an offer, you completely forgot the interviewers gave you their word that whatever the result, they’ll get back to you. Have you heard from them?’

She shook her head in the negative. ‘Not a peep.’

‘Then why have you thrown in the towel already? It’s not over until it is actually over. Just before the visit, you were full of faith and had such confidence in God that you would have this job and just one random piece of info and all that confidence seeped out of you faster than gas can spread through a ballroom. If this is yours, you’ll have it because I know you gave it your best, but you have to trust God and give Him space to be God. Only then can He do what you have asked.’

She swallowed and shook her head. ‘I truly want to keep trusting but I’m afraid of keeping my hopes up only to get slapped with another rejection. I feel like if things are looking like they might turn out sour, then, I might as well brace myself for the impact.’

‘Well, my dear, you can’t eat your cake and have it. You can’t be trusting God for a miracle and still brace yourself for a rejection. Yes, I know that it is a possibility that God  might not want this job for you, but your joy and solid confidence in that kind of eventuality is that it means He has something better for you.’

She nodded her head vigorously in assent to his point as she swallowed hard again. He knew she was working hard to keep her emotions in check and he was mighty proud of the temperate young woman she was becoming. Click to Buy this New Release by Ife Grace Dada

‘When you trust God for the best, you dare not prepare for the worst. You expect what you have requested because God is not a man that disappoints. If you get a rejection, it’s not a failure for you, rather, it’s a promise of something better to come.

‘Just think of my story, for instance.’ He said as he pointed at his chest with the hand that was not around her back. ‘I scoured everywhere for a good-paying job but could barely cater for myself, even with two gruelling jobs. Then I took that Spirit-inspired leap and started small with my firm. Unimaginable connections were made and before I could say, “Jack Robinson”, I was getting referrals to kings and princes. It was then I realised that none of those rejections was to break me or kill my faith, rather, they just weren’t part of God’s grand plan for me. That’s the way it works when we put our faith exclusively in God.’

‘When you’re waiting on God for a miracle, you’re doing it with full cognizance of who He is and what He can do, keeping in mind that what He cannot do does not exist. So, you have full confidence that however it works out, God is at the helm of affairs and He will make things beautiful in His own time.’

One tear dropped and she wiped it with the back of her hand, quickly, as she replied. ‘But it’s not always easy. I find myself doubting and worrying and second-guessing. I know I ought not to do that but I can’t help it.’

Tayo patted her shoulder. ‘Of course, you can. ‘What triggers doubt? Of course, it’s the thoughts that what you have asked might not come to you. But that’s a mix of the devil’s tactic and our errant minds. You simply have to fight back with the weapon of the saints. The Bible said in Revelation chapter twelve verse eleven that they overcame him by the blood of the lamb and by the word of their testimony.’

READ ALSO: What God Cannot Do… (A Short Story)

He picked a Bible among the pair that had been placed on each other after their family devotion earlier in the day and waved it before her eyes. ‘Pumpkin, the word of our testimony is this sure word of prophecy, the holy scriptures. Forever, this word is settled in heaven and God exalts it more than He does His name. This word commands answers and when accompanied with the name of Jesus, there’s nothing heaven will not release for our comfort.’

As Tayo spoke, he marvelled at how the gloom that had settled over her expression since the previous day gradually lifted and the usual life and liveliness that characterized her lovely eyes came back.

‘The word of God is that when we ask anything in the name of Jesus, we should believe that we have it and we shall receive it. Throw this back at the devil or your traitorous mind whenever it’s making you see impossibilities even after you’ve prayed. The Word says we have this confidence that when we pray, He hears us; and it means after we have prayed, we can go ahead and trust that what we have asked, we will certainly receive. Shikena! After that, drink water and rest!’

A small laugh bubbled out of her lips at his finishing and Tayo couldn’t hold back a small one, himself. It was so beautiful and almost unbelievable what the Holy Spirit could do through the Word. Peace settled in his being as she dabbed at some residual tears that had been shining in her eyes earlier and he got a sure word of prophecy in his spirit-man that she would get the job. He didn’t say a word, though. He needed her to work her faith and win by herself. It would take her far beyond even getting a job.

‘Thanks, egbon, for this. God bless you. I feel revived, jeez!’

He smiled and shook his head at her. ‘Does that mean I can finally talk to Adun without having to deal with your hundred sighs per minute?’

She rolled her eyes at him. ‘Do you think it’s cool to rub it in my face that you have someone to call “Adun” while I don’t?’

He smirked smugly. ‘Please, if I don’t rub it in your face, in whose face would I rub it? That’s how others also rubbed it in my face, my dear, it’s my time to shine.’

She gave him the stink eye as she stood up to leave the living room. ‘You’re the most annoying big brother in the world, just so you know.

He laughed out loud as she walked away. ‘Well, thanks for letting me know I have the potential to get into the Guinness Book of Record. Ose dear.’

He heard her cluck her tongue and stuck his out at her retreating back.

It might not be easy, but if you will trust God’s omnipotence and give Him space to be God, by placing absolute, undivided faith in Him, He’s able to and will do exceeding abundantly above all you can ask or think. Grace to trust is released unto you in Jesus name, Amen.

6 thoughts on “Give God Space to be God”