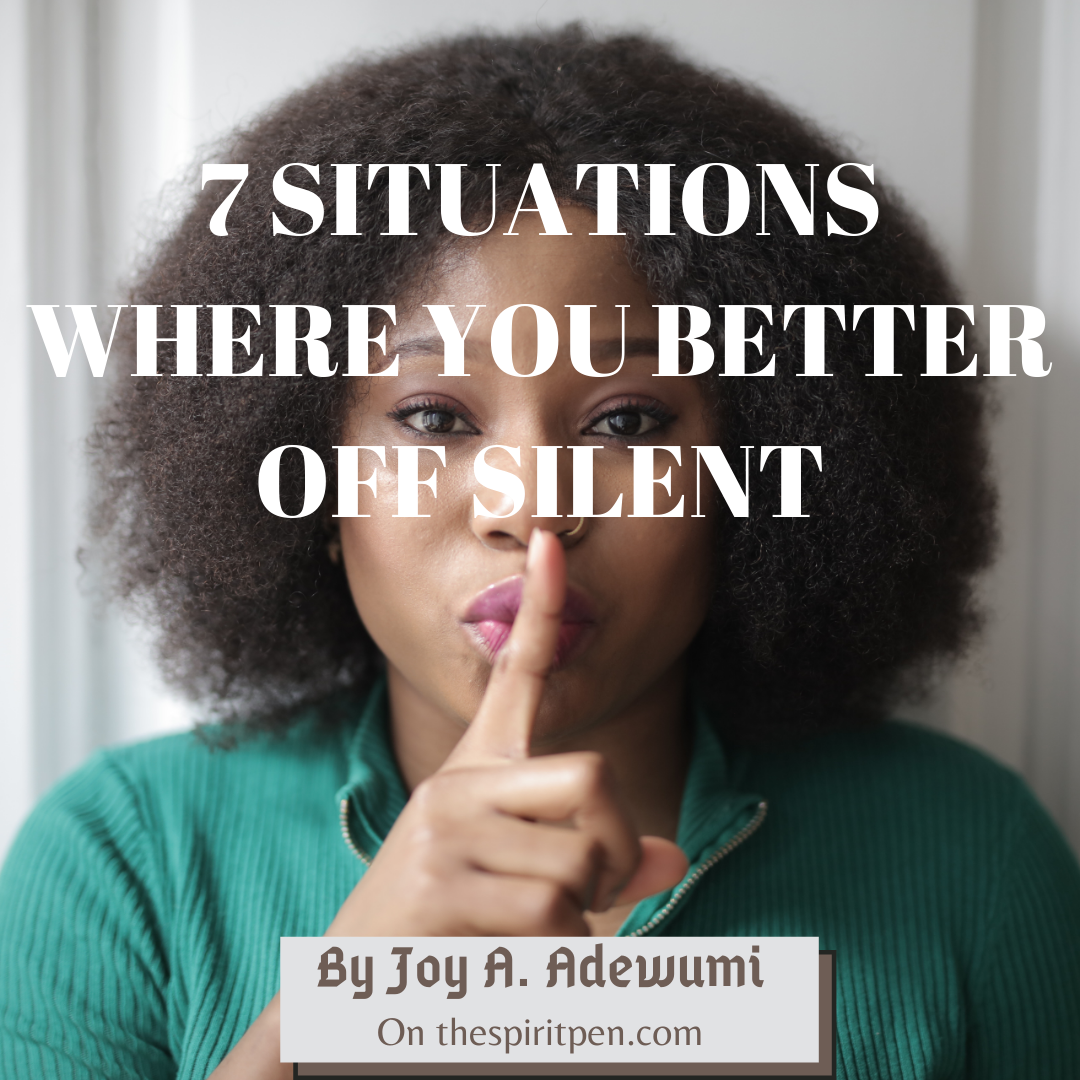 7 SITUATIONS WHERE YOU’RE BETTER OFF SILENT!

Over the last weekend, I realized something germane about my interactions with other people. That things always go better when I don’t have to comment on every issue and lend my opinion on every matter, solicited or not. I realized in the most real sense that day that silence really is underestimated. Then, I looked back on many interactions that had gone wrong and tried replacing the many words I said with a little bit of silence and I could see that the whole thing would have gone down very differently from the way they had if only I had stayed silent at the right time. Things would have ended more pleasantly.

The ability to stay silent is a gift that we don’t take advantage of enough. Silence is the answer to many problems. It is the ‘what if’ that could have averted many disasters. When you know when to stay silent, you save yourself a truckload of heartache and trouble. Even your relationships turn out better and healthier.

Click here to join my Telegram channel to get quick updates of latest articles on the blog.

In light of this, it is imperative for us to go through this article and know important situations where silence will work better than a string of even the most intelligent words known to man. Without beating further about the bush, I’ll launch into seven of those delicate situations where your silence is worth its weight in gold.

I have fallen into this ditch over and over again and I tell you, it’s one of the worst places to be. More than ever, that period when you feel your blood is at its boiling point is that time when you have to hold your tongue and clamp your lips together if needs be. Glory to God for the gate of the lips that give us extra fortification from the errancy of the tongue. Take full advantage of it! That point when you’re angry is when you’re most likely to lash out with the most offensive words you can ever muster and trust me, even you will surprise yourself at the kind of things that will pour forth. Nothing good ever comes from lashing back when you’re angry. In fact, the ability to keep quiet when you’re enraged makes you the better person. More importantly, seconds after, not only will you see the situation from a clear-eyed point of view, you will be able to give a cool-headed answer that will send your provoker into momentary shock because you did not play into his hands.

Even so the tongue is a little member and boasts great things. See how great a forest a little fire kindles! (James 3:5 NKJV)

When You Feel Insulted!

When you feel insulted, either of two things must have happened. It’s either someone has actually insulted you or you have misinterpreted a situation. Whichever it is, it is never a good idea to immediately lash back. Chances are that you might end up insulting the person right back, whether directly or indirectly. A moment or two of silence might be the difference between you ruining your testimony and you showing the other the Christian way. There is of course at this point an overwhelming desire to prove to everyone standing around that you’re not a wuss, but would you rather prove that and lose your peace with God? Take a deep breath, send an SOS to heaven, smile, even if it is tight around the edges and forced, then, let God’s wisdom lead as you reply. That might be a tall order but with grace and intentionality, you can do it.

The vexation of a fool is known at once, but the prudent ignores an insult. (Proverbs 12:16 ESV)

Someone probably is shouting, “All the ladies in the house, gather round!” But I’ll have you know I’ve seen men talk and react as terribly as women when they are cranky. We all get in that mood once in a while, some more frequently than others, but I’ve learnt that the difference between how badly it reflects on each person is how each one handles it. Personally, I’ve learnt to, first and foremost, keep quiet unless it’s absolutely necessary to talk, and second, take deep breaths. The deep breaths because my actions could very well speak louder than my voice. When I try to be calm, sending sporadic prayers to heaven for help, I go through that phase faster, and more importantly, without hurting anyone or losing my peace with God and man. Remember, it’s not your fault you’re cranky sometimes, we all have our downtimes, but it’s certainly your fault what happens as a result of it. Silence is one beautiful way to handle that period.

And the tongue is a fire, a world of iniquity. The tongue is so set among our members that it defiles the whole body, and sets on fire the course of nature; and it is set on fire by hell. (James 3:6 NKJV)

When You Don’t Have an Opinion!

You know, it’s okay and acceptable not to have an opinion sometimes. Trust me, it certainly beats talking rubbish and not only embarrassing yourself but also compromising your faith in the process – sometimes. Everyone is talking about this issue and it seems like it’s a show of intelligence. If you have something to say about such an important matter, you’re automatically an intellectual. Hold your reins, dear! Don’t give yourself a high BP in a new year. Life has enough stress shored up for you already than for you to go pack some more for yourself. If you don’t have an opinion, chances are the matter is of no consequence to you. If that is the case, leave it be! It’s no business of yours then. Let the people who have an opinion talk and just listen if you will. You don’t owe anyone an opinion and when you absolutely have to give one, you can trust God to teach you what it should be.

A fool takes no pleasure in understanding,
but only in expressing his opinion. (Proverbs 18:2 ESV)

When You’re Not Sure!

Reader dearest, lying is not a fruit of the Spirit, neither is it godly wisdom. An exaggeration is a form of lying. Also, last I checked the Holy Scriptures, bearing false witness is an absolute no-no! When you’re not sure, do well to acknowledge that fact and stay silent. Before you say something, as a matter of fact, you should be sure you have a reliable source, if not, rather than mislead or implicate someone else, just keep mum.

I tell you, on the day of judgment people will give account for every careless word they speak. (Matthew 12:36 ESV)

When Your Contribution will Negate Your Faith

There’s a rumor about a man of God or a celebrity. Already within the space of an hour, you’ve read and heard six different versions. Now, it’s the highlight of the gist in your house and they want your opinion. If you say it might not be true, they will tear your head off and have it for dinner, why not keep quiet. Noncommittal sounds like “Hmmn”, “Ah”, “Ehn ehn”, work unimaginable wonders in those kinds of situations. Don’t give in to the temptation to say something you might regret later.

Another scenario. It’s an office cluster. What you think is not the neatest of conversations is going on and you can’t simply walk away. Dear reader, though you cannot walk away, as a Christian, they probably know your stand and will not ask for your contribution. Just stay silent. Be invisible. Let them talk their talk. If someone tries to put you on the spot, ask the Spirit of God for wisdom and He’ll come through for you.

He who would love life
And see good days,
Let him refrain his tongue from evil,
And his lips from speaking deceit. (1Peter 3:10 NKJV)

That moment when you realise that you’ve become talkative in a discussion, it’s not the time to throw caution to the wind and think, well, I’ve begun running my mouth already, I might as well, finish. No! Chances are you’ve probably not gone too far at the first nudge by the Spirit of God and the situation is still redeemable. Round off your words in the least awkward way possible and promptly shut up! Going forward be careful to measure your words and answers and stay silent as much as you can.

In the multitude of words sin is not lacking,
But he who restrains his lips is wise. (Proverbs 10:19 NKJV)

Dear reader, you can be the Christian God desires you to be. His hopes for you are not unattainable. He wouldn’t hold them if they were. What you need is to submit yourself to God and to His leading per time. Don’t be set on your ways, be attuned to the nudges from the Spirit of God dwelling in you. With this, sooner than you can think, you’ll be a better version of yourself than you’ve ever been and improving.

I pray that God will give us the grace to apply our hearts to wisdom and work out our salvation with fear and trembling. Staying silent when necessary, as you’ve read in the article, is one surefire way to do that.

READ ALSO: THE BEAM IN YOUR EYES (A SHORT STORY)

From your partner in improvement,

2 thoughts on “7 SITUATIONS WHERE YOU’RE BETTER OFF SILENT!”